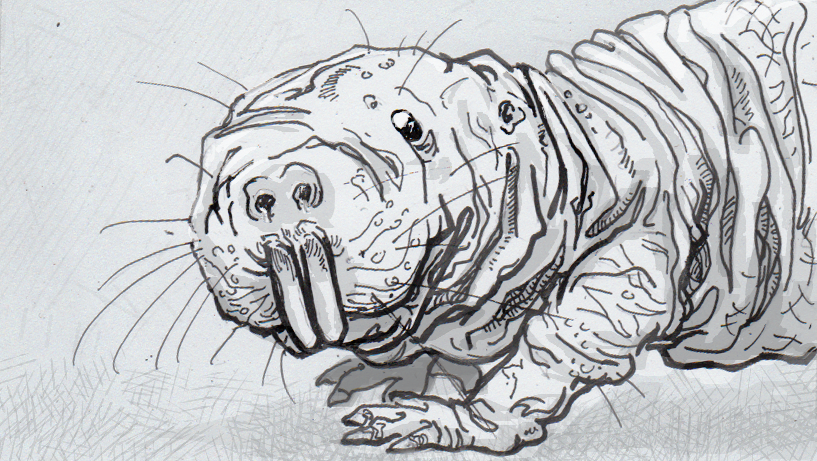 Naked mole-rats share the joys of motherhood through feces

Being a naked mole-rat queen is a big deal. The role of the lone, fertile member of a mole-rat colony is often earned through combat once an earlier queen has died. If successful, an aspiring queen can not only take over, but will undergo changes in her anatomy, such as a lengthened spine and matured ovaries. She’ll also be able to feed her subordinates her feces, but not in a punitive sort of way. The coprophagia is for the benefit of her children.

Like termites, bees and ants, and rather unlike mammals, naked mole-rats (Heterocephalus glaber) are eusocial animals. Most of the 20 to 300 individuals in any given series of tunnels are sterile, leaving the reproductive duties up to the queen and her one to three suitors. Naturally, three to twelve pups can be a lot of work, and the queen expects help from her sterile assistants. But without active reproductive systems, these mole-rats can lack the protective and nurturing instincts to guide and motivate an animal to care for another’s offspring. Fortunately, this is where the poo comes in.

Researchers from Azabu University in Japan noted that infertile females responded to cries from pups as a mother would. They found traces of he oestrogen compound oestradiol in these animals’ urine, but without working ovaries it wasn’t clear how it got into their bodies, triggering their care giving. Looking for a way for the queen to share some of her body’s hormones with the drones, hypothesis turned towards the queen’s poop. Measurable concentrations of the maternal hormones were found in her feces, which was then shared with the subordinates after they ate it.

These effects are strongest right after the queen gives birth. Subordinates of queens who did not have recent pregnancies were still likely to consume the royal poop, but they wouldn’t get the dose of oestrogen and thus were less interested in doting on crying pups. It left them more time to perform their other duties around the colony, like digging, cleaning and defense.