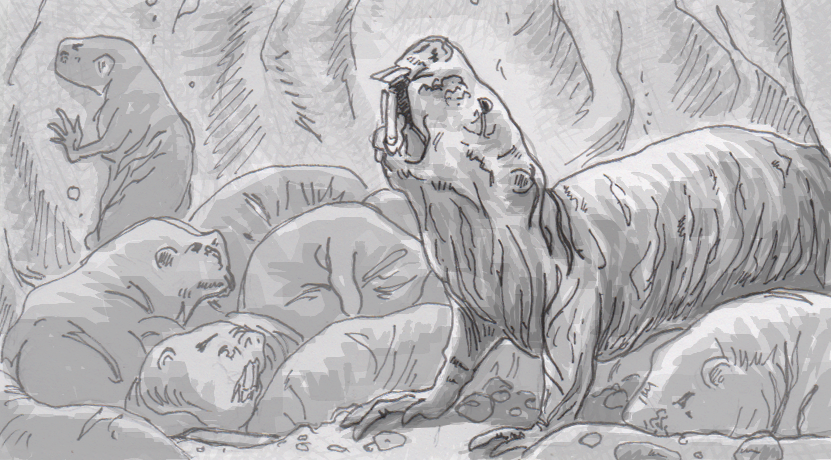 Living underground requires a lot of compromises, but naked mole rats seem to be determined to make it work, even if it means reworking their physiology to do so. On top of their insect-like social order, hormone-manipulating poop, and suppressed pain receptors, the latest compromise discovered for these small mammals’ subterranean lifestyle includes somehow surviving a total lack of oxygen. Unlike marine mammals who can plan their breaths and store extra oxygen in their muscle tissue for long dives, mole rats have a built-in metabolic trick for low-oxygen emergencies, and they seem to have borrowed it from plants of all places.

For the vast majority of animals on the planet, metabolic functions are based around sugars like glucose and oxygen. Food energy is converted to glucose that can be distributed around the body so that cells can make use of it when needed. Mitochondria in each cell then crack open that glucose using inhaled oxygen to make adenosine triphosphate (ATP), a molecule that can be used more directly by the cell as a source of energy to continue functioning. If oxygen isn’t so readily available, because you’re possibly in a stuffy tunnel full of other mammals breathing it as well, your cells can make due for a short time with just the glucose. This is a limited, last-ditch option though, as lactose quickly builds up and puts a stop to the whole system. For most mammals, crossing that point is when you go unconscious and cells get damaged until they die.

Since naked mole rats (Heterocephalus glaber) live in large numbers in tunnels with limited ventilation, dying whenever the oxygen supply got low just wouldn’t work. Rather than break up the family into smaller burrows like other rodents, running out of oxygen just triggers an alternate form of metabolism. Since glucose gets hard to work with without oxygen, mole rats will instead start making and metabolizing fructose, a sugar normally only produced in plants. Fructose was still less efficient than glucose for mole rat cells to use, but it didn’t come with the lactose count-down. Energy levels were lower, but steady. In tunnels with as little as 5% oxygen (versus 20% on the surface) a mole rat could carry on for hours with no harm done. For most other mammals, including a similarly-sized mouse, that lack of O2 would be fatal within ten minutes. Even with no oxygen at all, switching to fructose allowed mole rats to survive in a semi-dormant state for 18 minutes.

If the exact mechanics of this metabolic switch-over can be controlled, it may prove to be helpful to those of us living outside cramped tunnels as well. One of the big problems with heart attacks and strokes is how they end up depriving various tissues, like say, the brain, of oxygen long enough for cells to start dying off. If it were possible to buy some extra time, victims of these serious conditions might be able to mitigate some of the additional harm associated with medical crisis.

My second-grader asked: So the mole rats switch to plant mode? If they breathe out enough oxygen, can they make fresher air again?

The mole rats’ ‘plant mode’ doesn’t seem to extend quite that far. They make an alternate form of sugar to supply cells with energy, but they don’t completely rework their respiratory systems in the process, inhaling carbon dioxide and exhaling oxygen like an actual plant. If they did, it would seem conceivable that a colony underground could recycle the air underground, at least enough to avoid members passing out while going about their business.