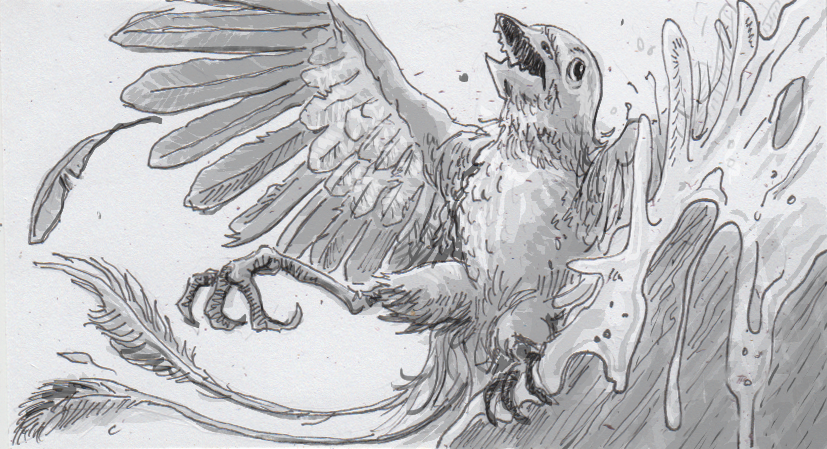 Dinosaurs have been teasing us about their feathers for ages. Individual tufts and feathers have been found in amber, but never attached to their original owner to make it clear where they came from. Skeletons have of course been found with the impressions of feathers in the surrounding rock, but those marks still left many questions about the makeup and evolution of feathers in the Mesozoic. Amazingly, two pieces of amber have recently been found that put all these pieces together in the form of two mummified wings from 100 million years ago.

Both wings retained their feathers, skin, claws and bones. Paleontologists from the China University of Geosciences examined each sample with x-ray micro-CT scans, which allowed them to view each piece of anatomy without damaging the tissues themselves. They were also able to trace the original flow of the sap before it hardened into amber, also discovering traces of claw marks in one specimen, likely from the moment the animal tried to free itself from what turned out to be a very perilous situation. Under standard lighting, the feathers seem to be a basic black color, but microscopic analysis found that the flight feathers were actually dark brown, with feathers under the wing being lighter browns with silver banding. This fits with previous hypothesis about ancient feather coloration, but it’s the best confirmation one could hope for.

Naturally, you can’t find samples this dense with information without uncovering new questions. The bones in both samples were smaller than what you might find in a hummingbird, but importantly, they also didn’t appear to be from a fully mature adult animal either. However, the wings were covered in mature, flight-ready plumage with no indication that the ancient theropods had ever moulted. Modern hatchlings are born with fluffy, downy feathers, which they eventually shed as their adult feathers come in. It seems that these ancient birds somehow bypassed that step by growing flight feathers from birth. This then raises questions about when birds evolved this two-stage feather growth cycle, and what pressures helped it succeed.

Both wings seem to have been from enantiornithines, a group of birds that were modern enough to confuse researchers when they were first discovered, but carry decidedly primitive traits not found on modern birds, like toothed beaks. Despite the well preserved flight feathers from these samples, it’s not entirely clear how adept at flight this group of birds really was. Fossil impressions of some species seemed to lack functional tail feathers, while others clearly had fully-developed wings. Skeletal analysis has found that the shoulder and chest muscles would allow for flight, but likely in a slightly different manner than that of modern birds.

My second grader asked: Did they find the amber under a fossilized tree? Maybe it fell over and that’s how the wings and sap were all preserved at once.

While the sap completely enveloped at least one wing, indicating it had been removed by the time the amber hardened, the other may have still been attached to a full body when the bird was first covered. These questions are hard to answer, because these pieces of amber were bought at a commercial market in Burma, where they had been excavated to use in jewelry. Paleontologists can gain a lot of insight when they can examine the terrain surrounding a still-buried fossil, but in this case researchers were simply happy for the chance to study such well preserved specimens, rather than have them end up on a chain around someone’s neck.