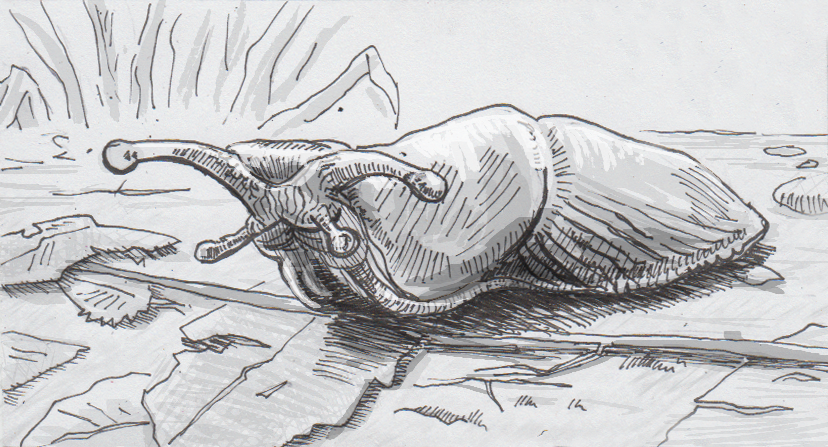 Nematodes get a lift on the slowest ride in the garden

Nematodes are tiny animals that eat microbes, like bacteria you’d find on a rotting piece of fruit. While microbes are everywhere, the nematodes do run into problems where their favorite food source may be exhausted, or conditions start getting too hot and dry for them to live. As conditions deteriorate, nematodes like caenorhabditis elegans don’t sweat it. Instead, they pack up and apparently hitchhike to a new location, preferably on, or in, a slug.

Packing up for the big trip

Hitchhiking for a nematode involves transitioning to a dauer larvae state. The worm goes into a sort of metabolic stasis, and is able to survive in harsh conditions, like a dried piece of fruit, for up to four months. Importantly, the usually also stand on end, extending their bodies outward to increase their chances of reaching out to passing animals, like the aforementioned slugs.

While c. elegans will settle for a roly-poly, or maybe a centipede, a slug is really the most luxurious ride possible. On the outside, the slug’s slime helps the nematode stay safely moistened on their way to new rotting food. More often though, nematodes were found riding in the slug’s intestines, where they’d not only be protected from drying out, but also bathed in food as it passed through the slug’s digestive tract. Nematodes seemed to be quite comfortable in this environment, and seemed to live there long enough to end up in locations no where near where they were picked up.

Once the ride is over, c. elegans and its ilk were generally deposited in slug poo before reactivating and moving on to their next food source. Thanks to slugs’ interest in rotting food, this probably wasn’t a long journey. While this hitchhiking didn’t seem to create any problems for the slug, it may be of concern for third-parties, like the surrounding plants. Nematodes are known to spread disease among flora, and with slugs and bugs moving them around, they can spread those diseases much further than they could normally do on their own.

Source: Nematodes Use Slugs Like Buses ... and Maybe Cruise Ships by Jennifer Frazer, The Artful Amoeba