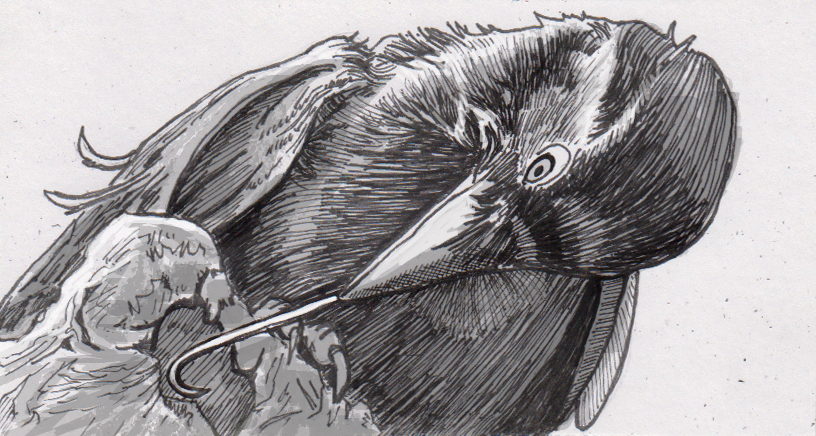 As the world’s premier tool-users, humans are used to living in, with, and sometimes even for, our stuff. We put enormous amounts of resources into making our tools, trinkets and other creations in a way that most organisms on Earth wouldn’t begin to understand. New Calendonian crows probably ‘get’ us though, as they not only make use of tools, but appreciate them enough to craft and care for them as well.

Making and maintaining a high-quality hook

Now, the toolbox of a New Caledonian crow (Corvus moneduloides) is relatively simple, since they only worry about one thing— a hook that’s used to pull bugs out of crevices. The forest-dwelling birds have been observed carefully selecting twigs from specific plants so that they can be bent into something resembling a crochet-hook, allowing the birds to dig their dinners out of trees and rocks. Younger crows are more likely to put extra effort into this process, using their beaks to clip twigs instead of simply yanking on them, which earns them a deeper, more efficient hook to work with. Researchers suspect that there’s possibly a trade-off in durability at play here, but in either case the birds aren’t finding objects that can be used as tools— they’re specifically crafting a device for a specific purpose.

The crows seem to appreciate the investment and utility this craftsmanship represents. While no hooked stick lasts forever, New Caledonian crows will try to care for their hooks as best they can. Since they can’t eat while holding their hooked sticks, they’ll carefully tuck their tools into loose park on a tree, under their foot, or in any other crevice that will keep things secure. Appropriately, the higher the crow is in a tree, the more careful the bird will be about keeping their tool safe, presumably to avoid losing it among other branches and leaves if it fell. When crows do end up dropping their hooks, researchers have reported that the birds can become visibly upset or frustrated by the loss. (Note: at this point, my third-grader feels compelled to demonstrate this behavior by stomping around the room and pouting.)

Is the extra work worth it?

Of course, from an evolutionary standpoint, the big question is if the hooks are really that helpful. The crows are putting time and effort into crafting these sticks, and the spread of this behavior suggests that its advantageous, but that’s not necessarily proof that the hooks are really worth the time it takes to make them. To rule out other explanations, (is the IKEA effect at play here?) researchers simply checked on how the hooks change the birds’ feeding habits. While the winkle beetles the crows were after needed some kind of stick to be pried from their hiding places, researchers compared how well straight sticks performed against a well-crafted hook.

The results were very clear— a good hook makes a big difference. Hooked sticks were two- to ten-times more efficient than their more basic counterparts. So unless a young crow spends an entire day perfecting their hook’s design, taking the time to make a good hook is worth it. The birds will more easily fill their own bellies, giving them more time to keep themselves safe, find mates, etc. In the long run, the investment in creating tools has even been linked to longer life spans and more offspring, which is a rather affirming notion for us tool-loving humans to hear.