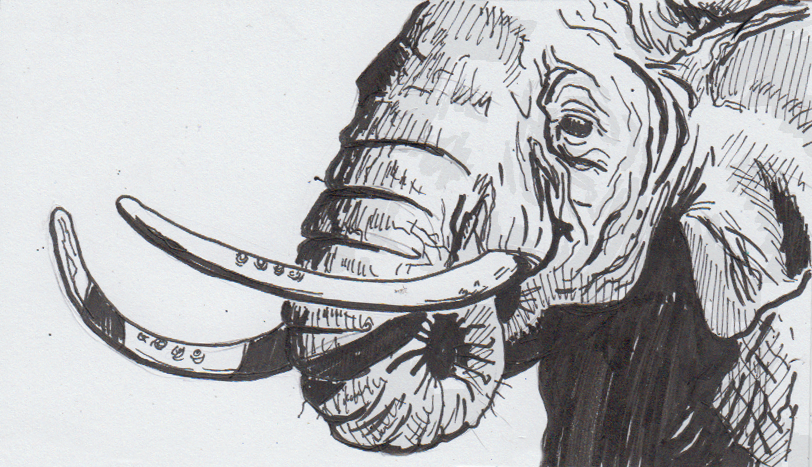 Poaching laws can be difficult to enforce unless the perpetrators are found red-handed. Rangers and customs officials do their best, but a lack of forensic evidence can make poached ivory tough to connect to a specific criminal. It turns out that some of that evidence, specifically poachers’ fingerprints, was there, it was just hard to actually see. Now two new compounds are changing that, revealing fingerprints up to 28 days old on irregular surfaces like tusks.

Anyone who has seen a modern crime drama has heard of the idea of “dusting for prints.” Dusting is a good word to describe the process where a thin layer of dark powder is gently brushed over a surface that may have been touched by a suspect. The composition of the dust varies, but each formulation basically clings to the residue left by human fingers, revealing the fingerprint pattern like a forensic potato stamp. The now visible fingerprint can then be matched to records of possible suspects for identification.

The catch for getting a legible print off of an organic surface like a tusk is that there are many tiny pores and ridges that distort the revealed print. To counter this problem, the new powders have much, much finer grains than what’s used on a countertop or car door. At under 50 microns per grain, they can stick to tiny amounts of residue that may be separated from the rest of a print by the shape of a ridge, all while providing finer resolution of each print. Older prints have also been recovered, meaning that a criminal’s involvement in a poached tusk can be tracked on seized tusks even after the initial event is weeks old.

This has opened up the possibilities of getting relevant finger prints off of tusks and a variety of other illegally trafficked materials, like hippo and whale teeth. Unfortunately, rhino horn is even more ridged and rippled, and so the results are less consistent there.

While rangers are looking forward to using these new tools in the field, identifying the poachers who handled each illegal tusk is only part of a real end to poaching. The real motivation to kill elephants for ivory lies in the huge amounts of money offered by smugglers, and so cutting off demand with laws like AB96, may be the most effective way to stop people cutting off tusks.

Source: New Powders Can Lift Poacher Prints from Ivory a Month after the Crime by Rachel Nuwer, Scientific American