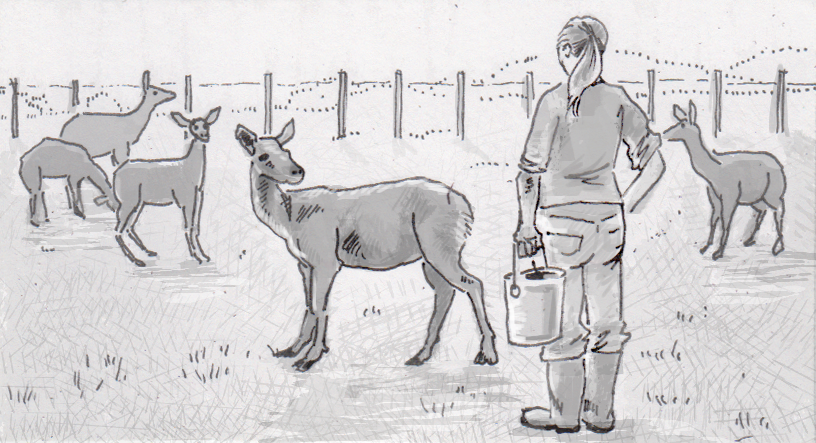 In the 19th century, Europeans imported red deer to New Zealand so that they could be hunted for sport. Apparently that hasn’t help people’s interest sufficiently, and New Zealanders like Steve Carden have been looking at new ways to fit these deer into people’s lives. Without much demand for venison, Carden and the state agricultural company Pāmu, are now marketing deer milk as a new dairy option for human consumption. With supposedly intense demand from top chefs, the milk likely won’t be putting cows out of a job any time soon, instead joining the ranks of interesting but still unusual forms of dairy that people harvest from our fellow mammals.

Every mammal seems to have its own recipe for milk, and the red deer (Cervus elaphus) are no exception. While cow’s milk is noted for its bland sweetness with enough fat to separate out into cream or cheese, deer milk much closer to cream from the start. The low sugar, high fat, high protein milk probably wouldn’t be too attractive as a beverage, but it it proving to be very attractive to chefs. The expectation is that the milk will be raised as an expensive, niche product to excite foodies even if it comes with a premium price.

That marketing angle isn’t just because of the way the milk tastes. Thousands of years of domestication, plus the naturally robust output of larger animals like cows, means that dairy cows can produce over 100 pounds of milk a day. The deer, on the other hand, aren’t about to line up to be milked, and when they do cooperate, only offer around a half-pound of milk a day. So even if people with well-trained palates really appreciate this new source of calcium, economics will keep most of us from ever tasting it.

Milking many types of mammals

Red deer may lie on the fringe of non-cow dairy production for humans, but this isn’t the first attempt at getting milk from deer. Reindeer used to be milked in Scandinavia, and moose are still milked in parts of Russia today. Sheep, goats, camels, buffalo and horses are all milked in various parts of the world, although the qualities of each species dairy sometimes limits how the milk gets used- if the sugar or fat content is wrong, the milk might not be usable in things like cream or cheese. To come full circle, Pāmu does have another niche to target if their red deer milk doesn’t get used in cooking all that often— the high protein content apparently also makes it a candidate for use in cosmetic products, which sounds oh so delicious.