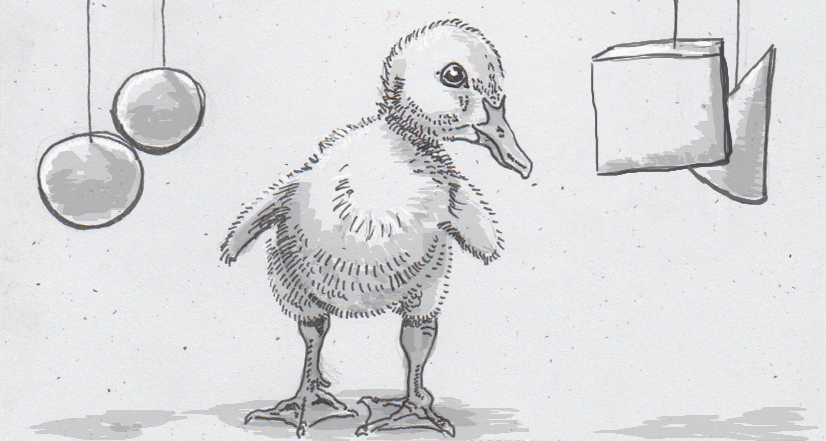 Our brains love finding patterns. When presented with a collection of information, we automatically start sorting and categorizing things, trying to figure out what concepts may link or divide things. Keys, two pennies and phone? Things I put in my pocket! Things made with metal! Things I misplace! There are lots of possible combinations, but for a long time its been thought that the individual connections didn’t matter as much as the fact that we could make them in the first place. It was assumed that as one of the many Things That Make Humans Special™, being able to appreciate abstract concepts set us apart from other animals. These ideas have been getting discredited over time though, most recently by some brand new ducks.

What the newborn ducks notice

When ducks and geese are born, the newborns look at the world around them and try to locate their mother in a process known as imprinting. People had noticed that ducklings didn’t necessarily imprint on their own mother, or even another duck or living creature. Leveraging this flexibility, researchers from the University of Oxford started presenting ducks with different pairings of objects to see what properties they took notice of, and if those properties even needed to be directly viewable, or if they could imprint simply on an abstract concept.

After hatching, ducklings were ushered into an empty space where they would encounter a pair of hanging shapes, moving around each other so that they’d be seen as 3D geometry, instead of a flat image. Those shapes were either the same, such as two red cylinders, or different, such as a red cylinder and a red cone. Once the ducklings had time to consider these, they had a moment to rest in the dark before being presented with two pairings of objects, none of which had been seen before. The ducklings did seem to pick up on a connection though, and if they’d started looking at matched shapes, they’d prefer those in the second test. If they imprinted on mismatched shapes, they’d head over to whatever best represented that idea, and then presumably wonder why the pyramid and cube weren’t taking them out to the pond for a snack.

Other animals have already been proven to pick up on these kinds of abstract relationships. Chimps, monkeys, rats, pigeons, crows and even bees can sort information on a “meta” level, with one big caveat— they need to be taught to look for such relationships first. Only after being trained to expect rewards for that type of sorting did these animals display this behavior, which doesn’t necessarily mean they couldn’t think that way, or if they just didn’t think to demonstrate that thinking for us. The ducklings, on the other hand, were making these comparisons within moments of their birth, which is leading to some reevaluation of how tricky abstract comparison may actually be (versus the assumption that ducklings have secretly been geniuses).

Just because ducklings can do something that humans can’t seem to handle until they’re seven to twelve months old doesn’t mean we have to immediately devalue being able to think in abstractions (after all, there are lots of things humans can’t handle when we’re born, like walking or even feeding ourselves.) Instead, this might mean that abstract sorting and filtering may have differing degrees of complexity, some of which can be pulled off by a duckling, others by adult ducks, and still others by even brainier crows or ravens. After all, it would be hard to ignore how experience helps add nuance to comparisons, since someone who had no idea what keys or coins were made out of would have a hard time drawing as many connections as a more experienced brain.