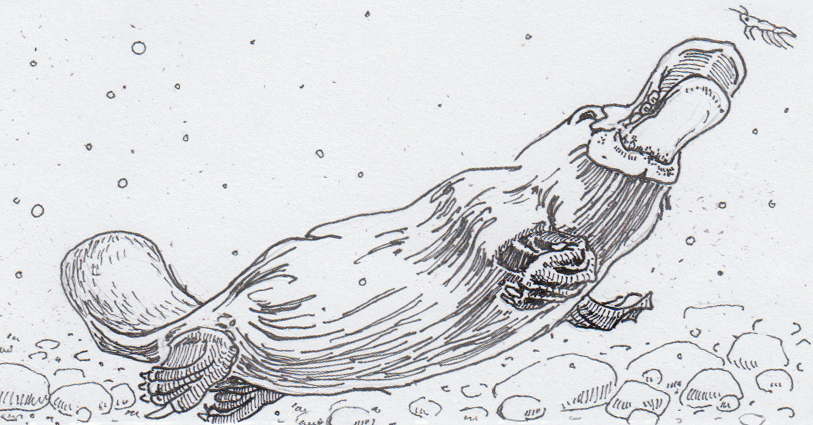 Like some kind of evolutionary hipster, platypuses seem to shun the anatomy most mammals embrace. Rather than give live birth, these monotremes lay eggs. Once their young are born, they ooze milk through patches of skin, since they lack nipples. Instead, these unusual creatures have picked up a weird grab-bag of anatomy, like billed mouths, webbed feet and even venomous spurs on males’ heels. Recent analysis of Obdurodon dicksoni, an ancestor from the Miocene era 23 million years ago, has found that these animals even gave up their teeth, trading them in for electroreception in their bills, and… ok, that last one sounds pretty cool.

Skulls of Obdurodon dicksoni indicate that this ancient relative looked very much like a modern platypus, only bigger. Rather than maxing out around two-feet long, O. dicksoni probably grew to closer to three-feet-long, sporting slightly flatter head with a more upright curve to its bill. Importantly, fossilized teeth, specifically molars and premolars, were found in the skull’s cheeks, versus the toothless bills modern platypuses carry. The reason for this difference may be a combination of anatomical real estate, as well as a shift in the animals’ diets, which have apparently gotten a bit dirtier than they used to be.

Swaps for a more sensitive snout

In the same region where molars used to be embedded in a platypus’s skull, you’ll also find holes to expose the trigeminal nerve, which allows the animal to sense changes in nearby electrical activity. This sensitivity enables a platypus to dig into sandy riverbeds, then locate small arthropods like shrimp, even when the water is too cloudy to see. Similar to sharks’ or electric eels’ electrolocation, this ability lets platypuses find their food because of the electrical activity in preys’ muscle movements. This is now central to how a platypus now hunts, but the skull of O. dicksoni indicates that ancestors didn’t depend on this ability as much as their modern counterparts. The opening for the trigeminal nerve used to be much smaller, possibly to allow room for the now abandoned molars.

Aside from the cool factor of sensing electricity, the platypuses seem to have done well enough with this trade-off. They now specialize more in feeding off the bottom of streams and ponds, compared to wider variety of targets an animal like O. dicksoni was likely able to eat. There are also fewer species of platypus today, but that might not be because of a lack of chewing. As a bit of a compromise, they now substitute bits of gravel they scoop up when hunting as temporary molars to help them grind up their food. Maybe after being so cutting edge, they’ll eventually go retro and just switch to gastroliths entirely?

My kids asked: So this doesn’t sound like Perry the Platypus very much?

Um, no? Perry’s anatomy, from his large eyes to leathery(?) tail don’t really have much to do with actual animals, since he was designed simply enough that young fans could draw him, rather than in response to evolutionary pressures. Venomous spurs would probably be handy for missions as Agent P though.