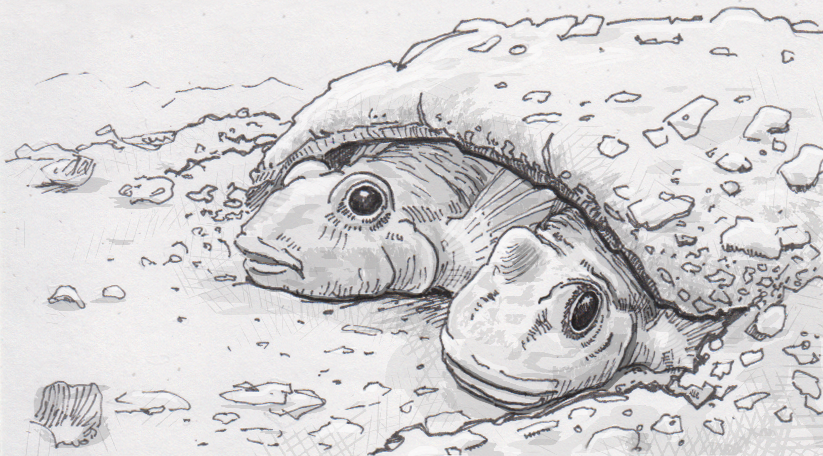 When submerged in water, human communication often gets reduced to hand-gestures, like a vague game of slow-motion charades. Without specialized equipment, it’s the best we can do in an environment that doesn’t accommodate our air-based speech. This limitation for our species has led to a lot of ignorance about how other species click, chirp and sing in the water, but new investigations are now discovering the importance of sound to the denizens of the sea. Scientists are now finding that aural communication is much more widespread than headline-grabbing whales and dolphins, extending all the way to the ocean’s floor with mating songs of the humble goby.

Gobies like Pomatoschistus microps are small fish that live usually don’t live more than a year. They live in shallow, coastal areas around Europe, and are mostly preyed up on by larger fish like cod. The sand goby (Pomatoschistus minutus) spends most of its time sitting motionless on the sea floor, waiting to grab passing invertebrates to eat. They perk up a bit in the summer though, when the males will commandeer an empty clam shell, sitting under it while courting local females with song. If the song catches the ear of a female, she’ll spawn her eggs under the male’s shell where he will fertilize and guard them until they hatch.

The goby’s song itself probably won’t sound much like a good Barry White album to a human ear, but experiments have found it to be crucial to reproductive success. To test the role of the male’s song, researchers subjected two female and one male goby to the sound of a motorboat engine, simulating the kind of noise pollution that has become common in today’s oceans. When the humble “purring” (or in case of the common goby, “woodpecker-like”) sounds of the male goby had to compete with sounds of human activity, there was very little interaction between the male and female fish. In the cases where the fish did mate, the eggs seemed to somehow be affected by the noise as well, with half the eggs dying before hatching, and the surviving eggs taking longer to gestate. While slower courtship is likely explained simply by noise drowning out the male’s song, researchers aren’t sure why the eggs also suffered once they’d been fertilized.

This sensitivity to noise is a mounting problem for our oceans, where ships of all sizes, as well as undersea drilling and mining, are making more and more noise each year. However, this study also suggests that noise may be a consideration on small scales as well. The scientists behind this study worry that labs that work with fish need to take greater care to keep noise to a minimum, as fish in aquariums may be reacting to sound and skewing research results more than researchers have commonly been accounting for.

Source: Female fish like males who sing by University of Gothenburg, Science Daily