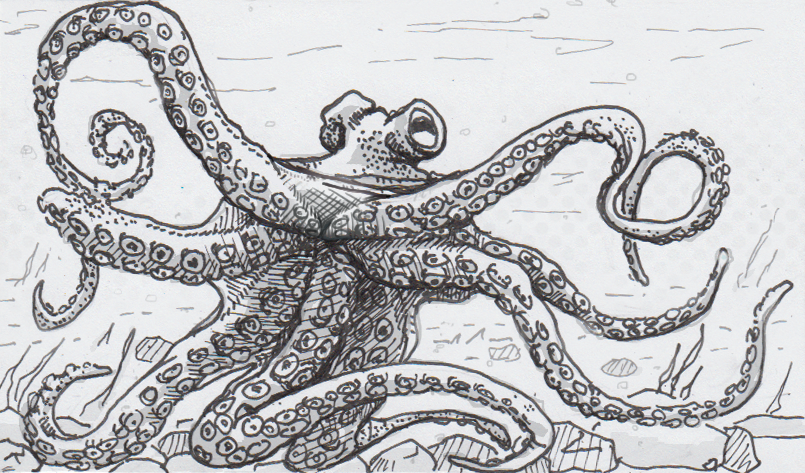 Octopus mobility benefits from being boneless

How would you get around without any bones? You’d be a big mess, right? Bones are a key component of our body’s locomotion, giving our muscles points of leverage and resistance. Their lack of bones is why octopuses are so bad at… hang on, octopuses are great at getting around! They are adept at swimming, crawling, squeezing and even breaking into a run from time to time. All without any bones to slow them down.

Since the hardest structure on an octopus is its beak, most of its body is incredibly flexible. This flexibility allows for them to squeeze through tight spaces, but also some amazing maneuverability when skirting along the sea floor. Almost like a tank turret, an octopus can keep its head steady while its legs change what direction they’re running in. This allows it to keep its eyes locked on a target while running sideways, backwards and then forwards, all without slowing down. In fact, without the the head as a reference point, notions of ‘front’ and ‘back’ nearly don’t apply.

Even with this amazing flexibility, octopuses do show some preferences in their movement though. They seem to prefer moving with their eyes at a 45° angle to their direction of movement, presumably because they are visually-oriented animals who are relying on their eyes for navigation. They also seem to rely on their ‘back’ four legs for scooting along the ground, although as stated above, the role of each leg can be switched around quite easily.

How are they able to keep their legs shuffling around so well? Instead of bones that could only flex so far in any direction, each tentacle has very strong muscles in it, which they contract and expand as necessary to reach and grab the surrounding terrain. Each tentacle also has its own mini-nervous system that helps coordinate those movements as well, allowing each limb to act independently of the others.

Source: Which way does an octopus crawl? Anyway it wants. by Kim Martini, Deep Sea News