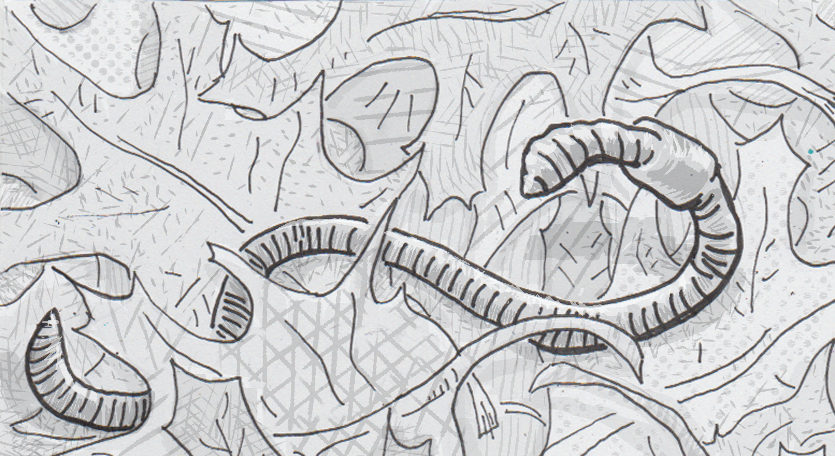 Only earthworms have the guts to prosper on polyphenol-filled plants

Your leaf-blower may have an ergonomic design, cordless motor and 200 MPH air-speeds, but all it’s really able to do is shove your leaves around. They’re still there, taking up space and keeping valuable carbon out of the soil for future plants. This isn’t necessarily your leaf-blower’s fault though— when it comes to actually processing dead leaves, there aren’t many things that can really do it. This is because they lack the specializations found in say, a worm‘s gut.

Dead leaves aren’t the top pick on most animals’ menus thank to polyphenols.  These organic molecules can provide a number of benefits to plants, such as blocking ultraviolet radiation, preventing infection and helping to preserve structures as antioxidants. Those preservative qualities also make leaves hard to digest in many cases, unless your gut is loaded with drilodefensins.

Drilodefensins were recently discovered to be the key to worm’s digestion. These specialized molecules break down the polyphenols meant to deter digestion, allowing the worms to eat up to a third of their own body-weight in vegetable matter a day. To keep that voracious schedule up, they create a lot of drilodefensins, but sophisticated imaging techniques also found that the worms recycle the molecules, saving a bit of energy in the process.

Without drilodefensin-filled worms, the Earth couldn’t really keep up with the leaf litter. Trees would quickly cover the ground with dead leaves, blocking new plants’ access to sunlight. While your leaf-blower might be able to theoretically assist with that, it couldn’t help recycle carbon back into the soil a way a worm does as it eats and poops, tunneling along underground.

My first-grader asked: Why can giraffes eat leaves off trees, but not leaves off the ground then? Basically, why are the dead leaves so much less edible to other herbivores than live ones? This proved to be a hard question to answer, as no version of this story really addressed this directly. The only answer I can come up with is that some leaves are more loaded with polyphenols in general, and those are the ones only worms will eat. They just have to wait until the tree drops them on the ground to get started.