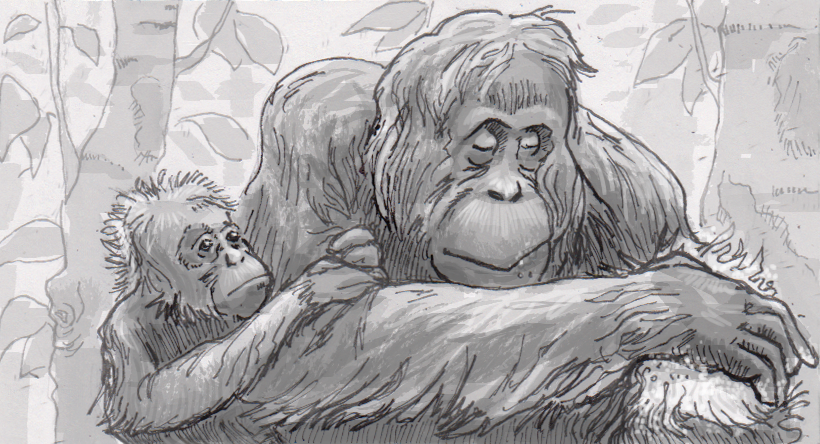 If your local pharmacist isn’t getting you medicine you need, you might be better off consulting an orangutan. They might not have an answer for every ailment, but orangutans have now been confirmed to both prepare and use medicinal plants to ease their own joint and muscle pain. The whole treatment only takes around seven minutes, but be warned- the inclusion of orangutan saliva means it’s not the most discreet way to ease an aching shoulder or back.

Like many medicines, the treatment begins an intensely bitter plant— a Dracaena cantleyi in this case. The patient/pharmacist chews the unpleasant leaves, working them into a white, frothy lather. They then rub the later into whatever muscle is in pain, allowing the active ingredients to be absorbed through the skin. Importantly, orangutans then spit the remaining bits of leaf out of their mouths, demonstrating that this behavior wasn’t idle, sloppy eating. The multiple steps taken to work up the lather suggest that the orangutan was deliberate in her actions, expecting a particular outcome of her slobbery treatment.

Researchers working in the Sabangua Forest have seen this behavior on seven occasions since 2003, making it hard to really be sure of the orangutans’ methods. However, the recently document treatment session by a female orangutan does follow an important trend in what was seen before. Only females have been seen medicating their muscles in this manner, which researchers believe may be because they want to alleviate pain and inflammation from carrying their offspring all day.

While this is the first time an Asian ape has been documented self-medicating, it’s not completely unprecedented. Indigenous peoples on Borneo also use Dracaena cantleyi for medicinal purposes. Outside of Borneo, other animals are also known to self-medicate, using ground leaves as insect repellent, or ingesting bitter plants to possibly purge their digestive tracts of nematodes. Nonetheless, researchers are hopeful that orangutans may still be better pharmacists than these birds and primates, and plan to follow them closely in case they can reveal plants that can hold medicinal value for humans.