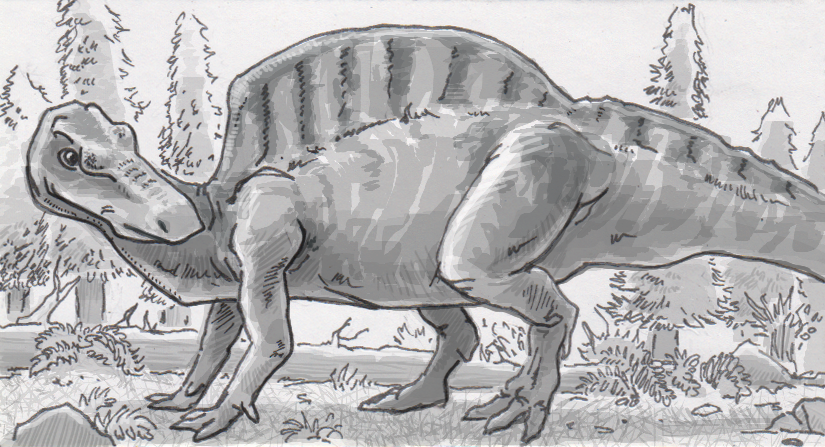 Young Ouanosaurus may have been cute, but they were fairly nondescript dinosaurs. They probably weren’t as rotund their cousins Lurdusaurus, and maybe had smaller hands than Iguanodons, but from a distance there probably wasn’t a lot that stood out about these herbivores. That changed as they aged though, and analysis of fossils has revealed the timeline for Ouanosaurus growth, particularly as it pertains to the development of the large sail that grew from adults’ backs.

While Ouranosaurus nigeriensis generally followed the iguanodont body plan, the 27-foot-long herbivore’s most striking feature was the row of bony spines growing on its back. Not every spine has been found, but it’s presumed that large, flat spines grew from the top of every vertebrae past the shoulder blades. The longest spine stood over two feet tall, indicating that a substantial structure sat on this animal’s back when it was alive. The details of that structure are still subject to debate though, with ideas ranging from a thin, sail-like membrane for thermoregulation, like jackrabbit ears, to a fatty growth to store food, like a camel or bison’s hump.

To dig into the spines’ potential purpose, researchers have been examining the texture and structure of each bone. The first thing they found was what wasn’t there. The spines didn’t have the rough texture you find for muscles to attach, nor did they have openings for blood vessels that would presumably be needed to carry warmed or cooled blood in and out of the sail if it were needed to control the dinosaur’s temperature. One thing the spines, and the rest of the skeleton, had were lines of arrested growth (LAGs). LAGs are layers of bone that grow around dinosaur bones in correspondence with the amount of nutrients available to the animal. Like the rings of a tree, they can be used to calculate the growth rate and age of a particular animal, including when individual bones were grown.

Based on this data, researchers determined that Ouranosaurus nigeriensis grew up fast, and was fully mature in under ten years. In fact, the dorsal spines of the specimen in question started growing when that animal was only three, but continued to grow larger each year. By age seven when that individual died, the sail seemed to be fully matured. While a juvenile body might not need the heat dissipation or calorie stockpile of an adult, it’s hard to ignore the idea that sail growth corresponded with maturity. This lends itself to the last hypothesis about O. nigeriensis’ spines, which is that they were used to hold a display structure.

Showing off with a sail

There are many examples of animals sporting otherwise extraneous anatomy in order to impress their foes, their competitors, and their potential mates. In many species, these structures are also different depending on the sex of the animal, such as the amazing plumage on a male peacock vs. the brown feathers of a peahen. We don’t know if the fossils we have were from males or females, but it there is growing evidence that these spines, and the sails they likely supported, where fairly impressive markers of maturity among these dinosaurs.

My four-year-old said: That looks like the toy we have, but without the crest.

While I thought he’d be fixated on the animal’s sail, it’s fitting that a four-year-old wasn’t yet concerned with such things. Instead, my son was referring to a toy Parasaurolophus, a hadrosaur noted for it’s large, bony crest.

Like these hadrosaurs, Ouranosaurus nigeriensis had a wide, beak-like mouth, although the two species weren’t directly related. O. nigeriensis predated Parasaurolophus by close to 50 million years, and the resemblance is largely due to convergent evolution, where that particular mouth shape was simply a successful way to eat a variety of plants for both dinosaurs.