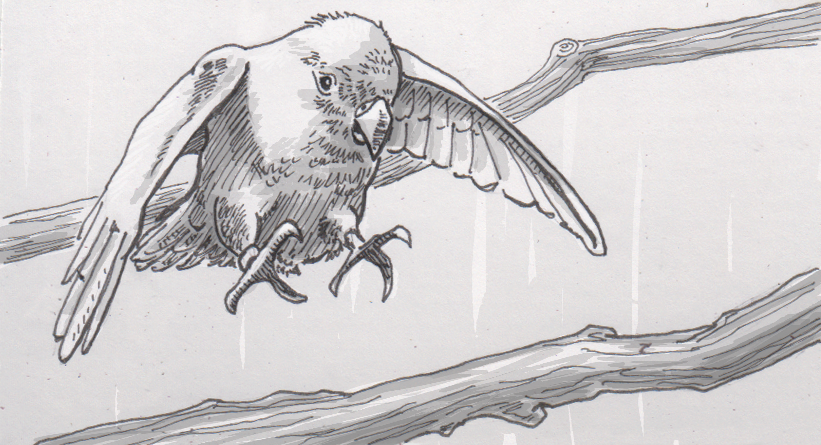 Pacific parrotlets demonstrate advantages of hopping and flapping, even without actually flying

We can explain how a modern bird flies today, but scientists are hoping that some hopping parrots will help us figure out how birds ever bothered to become airborne in the first place. Flying can offer a lot of benefits, such as access to insects that ground-dwelling animals don’t have access to, but since no bird suddenly appeared with a flight-capable body all at once, researchers are trying to piece together the steps that got birds closer to flying in the first place. If those intermediate body-plans didn’t offer some kind of benefit on their own, then this evolutionary path would have no reason to continue, since evolution couldn’t have been targeting the “goal” of flight feathers and a balanced body. Judging by the hops of some Pacific parrotlets, it looks like even a bit of gliding would have offered birds some advantages, all without using too much energy in the process.

With no microraptors to observe, Pacific parrotlets (Forpus coelestis) were studied as an analog to ancient bird bodies. The parrotlets were trained to hop from perch to perch, with each location being monitored by high-speed cameras and sensors to measure how hard the birds pushed off and landed when they moved. They were then prompted to move across different distances, starting at around eight inches and eventually moving out to 30 inches.

As the distance increased, the birds’ movement adjusted accordingly. Small gaps were handled with a hop while medium distances were crossed with slightly opened wings to allow for some gliding. Only at the larger distances did the parrotlets actually flap their wings. All of these adjustments were found to be the most energy-efficient form of movement available, since to get airborne legs can propel the birds better than flapping wings. The fact that each increase in distance would require a bit more specialized anatomy helps paint a possible timeline of benefits that may have driven birds’ evolution millions of years ago.

Finding advantages, even without flight

Basically, an avian dinosaur may have started with hops, but as feathers developed and the species’ size began to decrease, a bit of gliding could be added to those hops. Just as with the parrotlets, this dinosaur could then cover a bigger distance quite efficiently, benefiting enough to encourage further specialization. Eventually, flapping may have given dinosaurs a way to cover even more ground at low energy costs, which was likely a significant advantage even if it wasn’t quite full-blown flight. Both mathematical models and the parrotlets activity supports the idea that even if something like Archaeopteryx wasn’t capable of powered flight, even a tiny flap could have boosted it’s jumping range by 20 percent, which certainly beats crawling and falling when navigating tree branches or other tricky terrain.

My second grader asked: Why didn’t they do this study with chickens, since chickens can’t really fly either, but do make flapping-hops?

That’s not a bad idea, with the added bonus that chickens are suspected to be the closest genetic match for ancient dinosaurs. I can’t say if the biomechanics of chicken hops poses a problem, but parrotlets may have been chosen out of convenience. They’re small birds that are commonly bred, they’re trainable, and this team of Stanford researcher has worked with them before, making it much easier to design new experiments and tools.