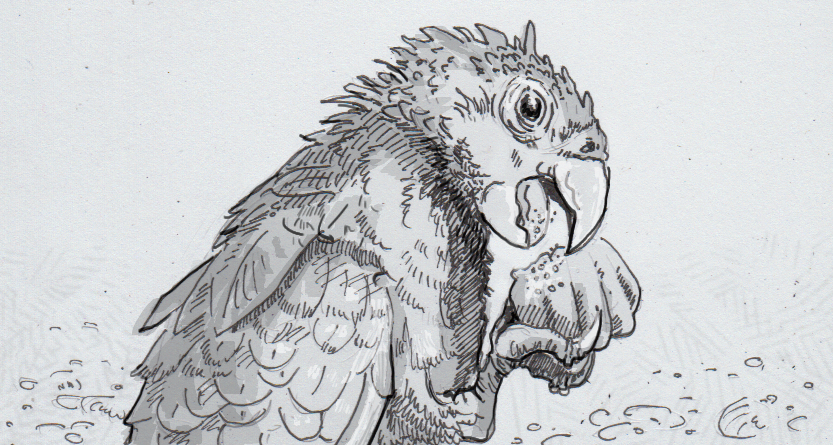 While some species of parrots have long been known to pick up language skills, very few had ever been seen picking up tools. A batch of greater vasa parrots (Coracopsis vasa) recently pushed that boundary though, not only using tools, but being the first non-human to use a tool to specifically grind an object down. What’s more, it appeared to be part of a multi-step process aiding other parrots’ nutrition, opening up new questions about the birds’ intelligence. And hourly rates for masonry work.

The parrots were being kept in an aviary by researchers from the University of York. The bottom of the enclosure was covered in rocks, pebbles, sticks, and cockleshells, which seemed to warrant a lot of attention from the birds. Upon closer inspection, they were seen using pebbles and nutshells as tools to scrape the shells. The resulting powder was then licked up, presumably as a source of calcium, which is difficult to hold onto for birds, especially if they have eggs to produce.

This was a bit unexpected though, as the scraping parrots were male, not female. However, since breeding males will often regurgitate food to feed their mates, it’s likely that the shell scrapings would also be passed along as a nutritional supplement with those meals. So while the scraping males weren’t necessarily after the calcium themselves, there would be a clear incentive to pass it along for the eggs of their potential offspring.

This didn’t mean that the tool use was a battle for male dominance. Rather than flaunt their pebbles as proxies for their virility, many of the birds were seen more or less sharing the tools. Snatching a good nutshell from the mouth of another bird seemed to be tolerated, which may be thanks to the semi-exclusive breeding habits of greater vasa parrots. There’s less risk of losing a mate to another bird, so there’s less reason to fight over a pebble.

Many of these questions need further study in the wild. Researchers would like to see if the use of tools for calcium is limited to breeding season, or if they’re in use year round. There’s also interest in how widespread this activity is in the first place. Since cockatoos, as members of the parrot family, have learned to use sticks as tools by observing each other, there’s a chance that these shell-scraping techniques are actually a bit of invented culture, shared only among the birds in the observed aviary. Wild parrots need to be seen using the same concepts to prove if this tool use is a new innovation or a tradition among brooding birds.

Source: Parrots use pebble tools to grind up own mineral supplements by Sandrine Ceurstemont, New Scientist