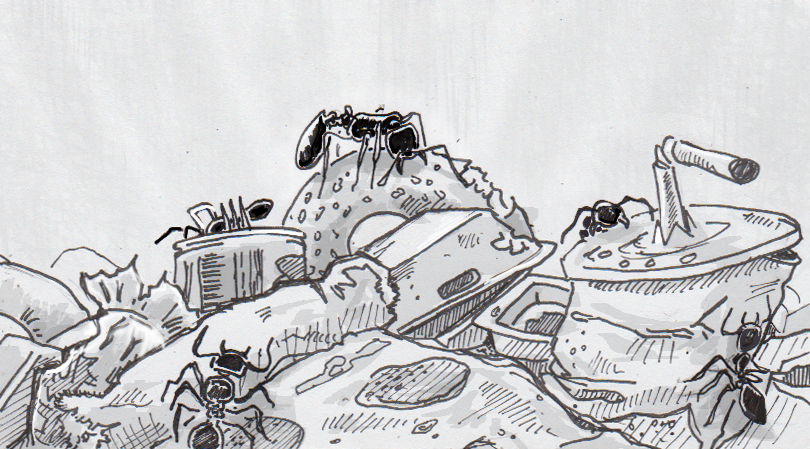 Ants, as a group, are pretty flexible about their diets. Fruit, vegetables, scavenged meat and even fungi are all on the menu for many species around the world. Urban ants, however, have had to make some special adaptations, since the sidewalks of New York City don’t necessarily have an abundance of oranges, melons or dead caterpillars. So pavement ants (Tetramorium species e), have started adopting humans’ diets so that they can survive on the roasted nuts, pizza, candy and whatever else has been spilled or discarded throughout the city.

Searching for our favorite sugars

To verify that the ants were incorporating our junk food into their diets, over 20 species of ants were studied and compared. Researchers looked for carbon-13 building up in their bodies, as this isotope could then be used as a sort of molecular fingerprint of the corn and sugar cane that had been used in human food. As predicted, the pavement ants showed a remarkable amount of these isotopes in their systems, whereas their neighbors in parks and other green spaces did not.

It may seem regrettable to think of any animals being raised on dropped hot dogs and pretzels, but this flexibility is allowing the ants to thrive and inhabit much larger portions of the city than their green space neighbors. The pavement ants seemed to handle the sugars well, avoiding human concerns like being overweight, but the changes in their physiology may mean they’re giving up on some other nutrients they’d get from eating more traditional foods like other insects.

The next step is to see if this acceptance of human junk food has grown into a preference. We know the ants are eating our food, but researchers now want to see if they’ll actively prefer it over their more traditional food sources if both are equally accessible. There’s even a chance that we could benefit from these preferences, as the ants may assist us in removing and processing trash, similar to how other species clean up forests and jungles.