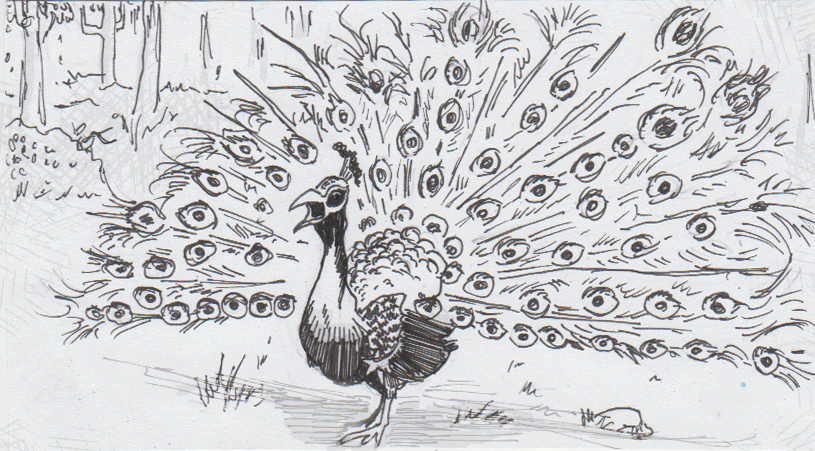 Peacocks have the best-looking audio system ever

Peacocks famously have large, colorful tails that they use to attract the attention of potential mates. The iridescent blue and green feathers are highlighted further with eye-spots, making them hard to miss. Unless of course you’re a peafowl that’s living in a hilly forest, ruining the line-of-sight to a would-be suitor. Fortunately, peacock tails are good for more than good-looks.

“Come to the peacock meeting”

So how do peacocks get the word out to, as my kindergartner put it, “come to the peacock meeting?” It turns out that their tails can act giant, percussive noisemakers. They shake and rocks them, producing a low-frequency, but very loud sound. This sound not only reinforces the quality of the bird’s tail, but it travels well across busy terrain like a forest, especially compared to the higher-pitched calls we normally hear from the birds.

Why we never noticed peacocks dropping the bass

The volume of the sound really shouldn’t be ignored- at over 100 db, these rumbles are comparable to a jackhammer from a meter away. People just can’t hear a frequency this low, and thus never considered tails as a means for audio communication. The sounds were only discovered after a researcher watched a peacock seemingly listen to his own audio reverberating off a wall. That sparked the recording and analysis of 46 more birds to confirm that the tails were acting as speakers, but human ears just weren’t privy to the party. Early examination of peafowl ears indicate that they hear the tails just fine, and even show reactions in their behavior when a tail is shaking.

Once this is confirmed, further work can be done to determine the purpose of the sound. Is it a warning, an invitation, or maybe avian-house music? Whatever it turns out to be, the multi-purpose tail feathers are a good reminder that there is plenty of activity in the world that’s outside our immediate perception.