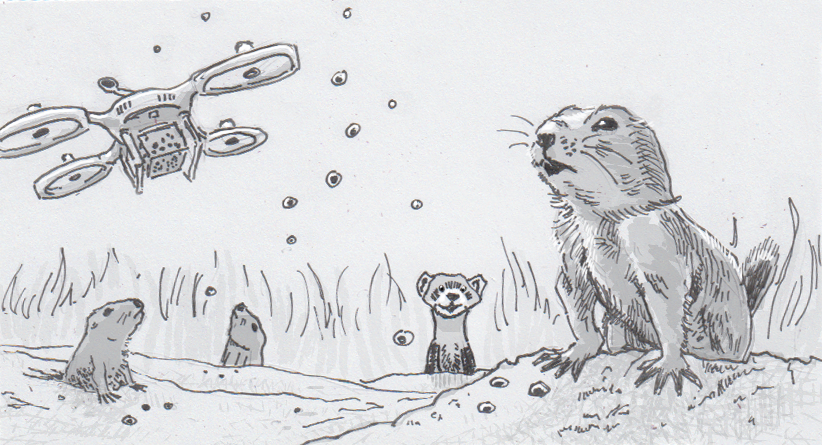 Conservationists are currently working on a plan to feed prairie dogs peanut butter, because black-footed ferrets are going hungry. They’re not confused about who needs the food, since the peanut butter is intended to be a distracting bait, not sustenance for the prairie dogs. That bait will then be loaded with vaccines for a disease called sylvatic plague that has been devastating prairie dog populations, and depriving the ferrets of their primary source of food. So the prairie dogs get peanut butter, stay healthy and… get eaten. Win-win?

Fighting off the fleas

While nobody is hoping to see prairie dogs die, the real goal behind this project is to keep the ferrets alive. Black-footed ferrets (Mustela nigripes) critically endangered, with an estimated 300 individuals left living in the wild. Prairie dogs are their primary source of food, but the plague has made it difficult for the fuzzy predators to get enough to eat. Since the plague is spread by flea bites, conservationists first targeted the infected insects with pesticides, but that proved to be a temporary solution at best. The fleas developed resistances to the pesticides, and there were concerns about unintended ecological effects beyond the bugs. This is when planning shifted to peanut butter and automation.

Giving up on controlling every flea in the forest, conservationists decided to bolster the prairie dogs’ immune systems. Early field tests found that deploying the vaccine in peanut-butter balls around the size of an M&M candy was an effective way to immunize prairie dogs. The prairie dogs seemed to eat them up as fast as people could make them, which was actually pretty slow, since they were being made and distributed by hand. With this underlying premise, the team at UL Bend National Wildlife Refuge in eastern Montana invested in a carp bait-balling machine speed up production, and is now looking to flying drones to start getting them to prairie dogs.

The drone hasn’t been built yet, but the design should be able to distribute peanut butter to 400 acres of prairie dogs an hour. Carrying 5,000 pellets at a time, the drone will catapult a vaccination pellet every 30 feet, at which point the prairie dogs should do the rest. While this all looks good for the hungry ferrets, they need to make due with the current surviving prairie dogs a bit longer, since the deployment drone is still being engineered.

Source: A Fleet of M&M-Shooting Drones Is the Black-Footed Ferret’s Last Hope by Madison Kotack, Wired