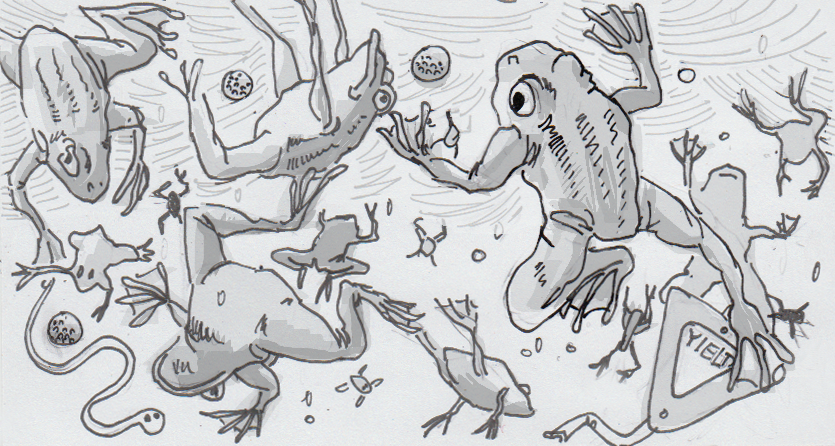 Peculiar precipitation from critters to colors

We’ve all heard it’s “raining cats and dogs,” but perhaps that should be amended to “raining signs and frogs?” For hundreds of years, people have been documenting bizarre objects falling from the sky, as well as strange precipitation itself. While you don’t see black snow or falling frogs every day, these events have apparently been common enough that we’ve wrongly assumed meteorological explanations for unusual droppings, totally misunderstanding the weather’s true role in the story.

At the larger end of the scale, frogs have famously been dropped from the clouds, in addition to hay, maggots, seeds, and snakes, all of which would have meant a confusing trip to the car was at a minimum. Road signs have been found 50 miles from their point of origin. There was once a shower of golf balls in Florida. In all these cases, the explanation is likely that a tornado or waterspout picked up these various animals and objects before depositing them far enough away to make their trip totally baffling to onlookers (and presumably the animals themselves.)

Colored rain operates in a slightly similar way, just without anything as dramatic as a waterspout. In most cases, the “pigment” in the rain is dust or particulate scooped up into the air, possibly from thousands of miles away since dust is so much lighter than a frog or a golf ball. This has lead to white rain with salt from a lake bed in Washington state, red rain from the Sahara, yellow rain from the Gobi desert, again in Washington and even black rain and snow in India thanks to burning oil from Kuwait.

With all this particulate-laden rain, it’s easy to understand why a round of yellow “rain” in Laos in 1978 made people assume some form of pollution was at fault. The yellow globs found on villages and jungles was thought to even be a fungus, possibly devised and delivered as a Soviet biological weapon. Actual tests of the “rain” proved it was much more mundane though. As temperatures rose over 82° Fahrenheit, neighboring bees needed to act fast to try to cool their hive and protect developing larvae. They then flew on a “defecation flight” to jettison large quantities of yellow poo, shedding the heat naturally contained therein.  The weather’s only role was to make the bees too hot, requiring this unusual method of climate control.