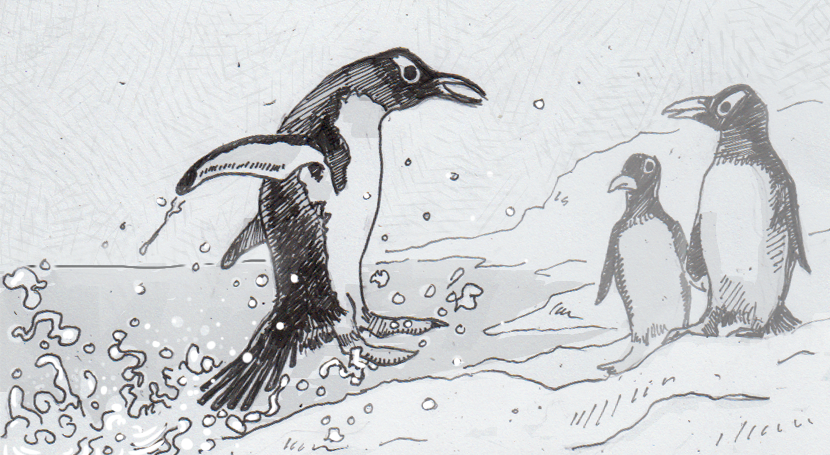 To avoid freezing in cold water, the trick seems to be to just avoid getting wet. While that sounds a bit dismissive, it’s actually the premise behind wet suits, which act as an insulating layer between your skin and the cold water around you. Humans aren’t the only animal to make use of this idea, as many other creatures have evolved ways to keep water off of their skin. Common examples include ducks and geese sporting wet suits made of feathers, but the champions of this concept are penguins in the Antarctic, who not only avoid being wet in the water, but also on land where they’re contending with temperatures as low as -135.8 degrees Fahrenheit.

Assuming your average waterfowl could somehow swim in the Antartic sea, a successful dip in the water would still leave them at risk of freezing when they emerged. Even if their skin stayed dry in the ocean, the water on their feathers would freeze in the cold air once they surfaced, since air even peak air temperatures are below freezing. Researchers noted that native penguins don’t seem to face this problem though, indicating that their insulating feathers were going beyond keeping their skin dry. What they eventually found was that the feathers themselves were insulated, preventing them from really getting wet either. This way, when the penguins got out of the ocean, a quick shake would fling any water away, leaving their plumage intact.

The superhydrophobic feathers used two mechanics to avoid getting waterlogged. The feathers were found to be covered in tiny pores, which were just the right proportions to capture air. This air would essentially form another insulating layer over the feathers, so that the water never had anything to sink into. The droplets that did hang on were so repulsed by this layer that they’d form spheres, minimizing the surface area in contact with the feather and at the same time trapping the water’s tiny amount of heat inside as much as possible. Since the heat couldn’t be wicked into the cold air as well, the droplet would remain liquid until the penguin could easily shake it off. The second mechanic was basically backup- similar to ducks, penguins secret oil from a gland below their tail that helps coat their feathers. It’s just that in their case it’s a high octane version more suited for the extreme cold these birds cope with.

Applications outside the Antarctic

Interestingly, air pockets repelling water doesn’t extend to other penguins, but a similar concept has been used by animals in extremely dry conditions. Geckos in Australia also trap air against their bodies, so that water and dust can be repelled, keeping them clean. Researchers hope to utilize the idea of pore-based hydrophobic materials, but in the skies. Water-repellent airplane wings, for instance, could increase flight safety in bad weather, replacing current de-icing tools, which are often difficult and expensive to use.