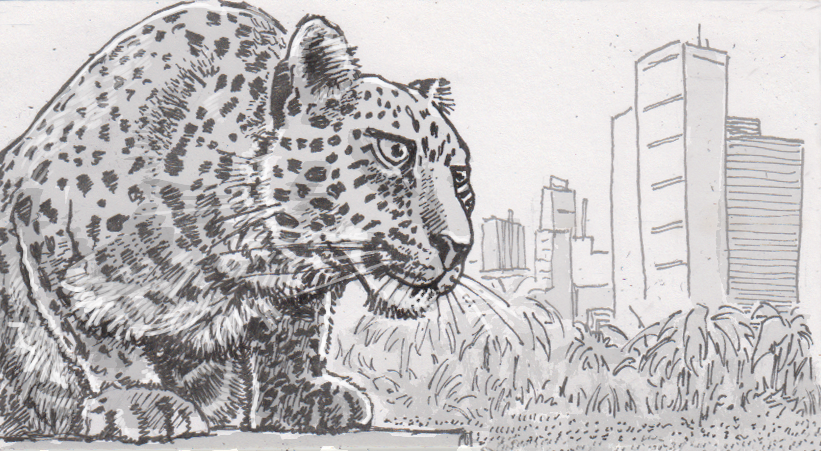 In 2014, researchers scoured Mumbai for poop to learn about the diet of the local leopard population. Around 35 of the big cats were known to live in the Sanjay Gandhi National Park, which is basically surrounded by human development. This obviously cut the leopards off from their usual menu of hooved mammals, so researchers were worried that they’d find a lot of livestock in the feces they collected. As it turned out, the leopards were eating some livestock like goats, but the majority of their meals were actually domesticated dogs (and cats), which may be really good news for the people living near the park.

Reducing the spread of rabies

As alarming as living near 35 hungry leopards may sound, the cats aren’t nearly the problem the 100,000 feral dogs are. It’s estimated that most of Mumbai is populated by around 1,700 dogs per square mile. Those dogs and their kin across India are thought to be responsible for the majority of the 20,000 people that die of rabies infections every year. So while leopards had seven reported attacks on humans in 2017, dogs are making a much bigger impact on life in the city. With laws restricting population control measures to sterilization programs, meaning the leopards are the most direct way to reduce the number of feral, and possibly rabid, dogs in Mumbai.

Based on the aforementioned fecal analysis, leopards appear to eat around 1,500 dogs per year, accounting for 39 percent of their diet. By eating that many dogs, researchers estimate that the leopards are saving humans from 1,000 bite incidents and as many as 90 cases of rabies. In doing so, they’re also effectively saving the overall community around $18,000 per year, factoring in medical costs, lost work time, and more direct animal management issues. These benefits aren’t equally distributed though, as the leopards only hunt near the park where they live. While the leopards are bold enough to stalk through parking garages, it’s only in their limited territory that dog populations are reduced to around 42 dogs per square mile.

Going forward, researchers want people to better understand how these leopards are helping their community, partially saving them from a problem the humans created. Aside from human developments building over the leopard’s habitat, the dogs have likely gotten out of control thanks to a plunge in vulture populations across India. For the last 20 years, a drug used to treat cattle has been killing vultures that feast on carcasses, leaving that carrion for feral dogs instead. Dog populations grew, getting us to a point where they’ve become the focus of leopards’ diets. It may seem nice that the leopard’s are proving to be so adaptable, but researchers are concerned about how dependent they’ve become on human activity for their food. In a weird way, it’s almost like the early stages of domestication, but for large, bone-crushing cats instead of the dogs they’re now feeding on.

My five-year-old asked: How can they eat a goat? Can they eat the horns? Also, it’s sad that they eat kitties.

I wasn’t able to find proof of a leopard eating a goat’s horn, but big cats do regularly chew up and swallow the bones of their prey. Since horns are basically specialized bone tissue, a leopard could probably crush through it if the horn wasn’t too thick.

Not sure what to say about the feral cats getting eaten though, besides that my son is apparently not a dog-person.