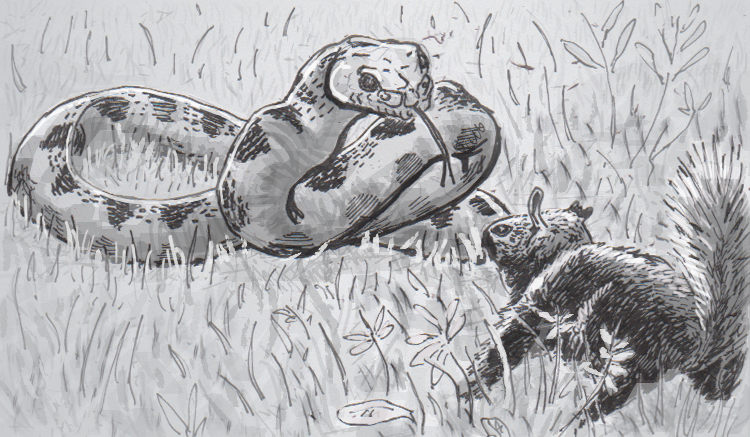 The percarious survival dynamics between snakes and their prey

Snakes are apparently a very compelling evolutionary pressure. Nobody wants to get eaten by a shark or a lion, but there aren’t a lot of animals specifically evolved to avoid tiger sharks, as helpful as that may be. Snakes, however, seem to make a very powerful impression as predators, influencing everything from physiology to eyesight in their prey. Unlike the swath of sharks that could bite you in the ocean, these anti-serpent specializations are often localized to the snakes in specific regions, pushing some prey to develop immunities to toxins while others turn themselves into potentially fatal feasts if caught and ingested.

As you might imagine, squirrels (Otospermophilus beecheyi) have devoted some energy to surviving around rattlesnakes (Crotalus oreganus). Defensively, squirrels have been observed covering themselves in chewed snakeskin to disguise their scent, confuse snakes with their bushy tails or even ganging up to try to actually kill a snake directly. Since the snakes have counters to some of these tactics, like heat-sensing pits in their faces and very stealthy maneuverability, some populations of squirrels have evolved yet another line of defense. The obvious danger in from striking rattlesnake is its venom, which is why some squirrels’ bodies create their own anti-venom proteins to help survive an attack.

There’s a lot of regional variability in the venoms and anti-venoms, which might help explain why recent tests found the squirrels biochemical defenses failed 12 out of 12 times. This was surprising, since a survivable defense is often more important than an efficient offense but somehow the pendulum in squirrel-snake relations has swung in favor of the rattlesnakes. At least for the time being.

While being eaten is always a winner-takes-all scenario, some prey have found a way to turn the tables on their serpentine hunters. In battle between rough-skinned newts (Taricha granulosa) and predatory garter snakes (Thamnophis), the newts are the ones packing the toxins, theoretically scaring off any snakes that might want an amphibian for a snack. This concept isn’t limited to newts of course,  and in some animals it’s such an effective defense that other species evolved to mimic the poisonous prey rather than develop poison themselves.

The newts, however, aren’t messing around. Using the same tetrodotoxin found in pufferfish, a consumed newt is possibly 10,000 times deadlier than cyanide. But since garter snakes would still really like to eat those newts, some populations have been following the squirrels lead, becoming resistant to the newts’ poison. The core of this resistance probably first evolved long before these snakes were eating these amphibians, but the snakes have been able to avoid dropping newts off their menus entirely with this biochemical trait in their ancestral back-pocket. As with the rattlesnakes and squirrels, this biological arms race will likely avoid crowning a singular victor any time soon. In the mean time, it’s probably best to avoid eating newts. Or being bitten by rattlesnakes. Or angering mobs of squirrels.