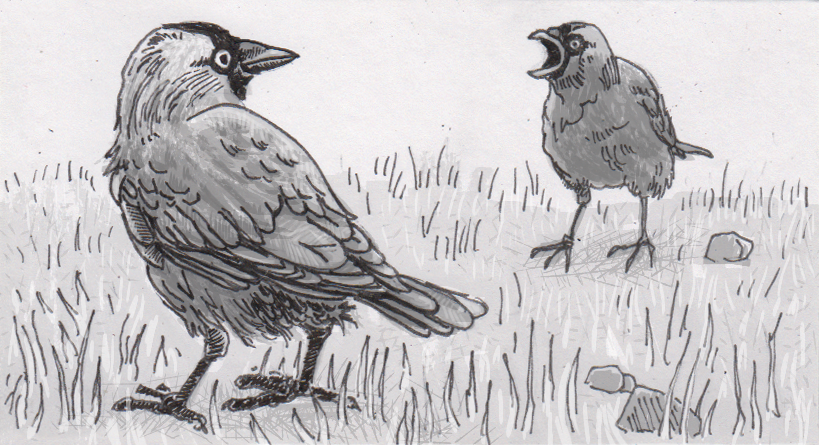 From Chicken Little to The Boy Who Cried Wolf, humans have plenty of lessons about reacting to every alarming bit of news we happen to hear. Even if communal defenses against threats are effective, being completely indiscriminate about when to react to cries of alarm can be exhausting and risky in their own right. While we’ve never heard a bird’s version of Chicken Little, there is some evidence that some species have also figured out this lesson, as they seem to be selective about when they respond to threats reported by their neighbors. In particular, jackdaws (Coloeus monedula), a relative of crows, apparently care more about scolding calls from their closer kin over birds that just happen to be nearby.

A scolding call is a bit like the more common “alarm call” many birds employ to stay safe. However, while an alarm call simply tells birds within earshot that danger is afoot, usually prompting an evacuation, scolding calls are a call to arms. Instead of fleeing, jackdaws responding to such a call will engage in mobbing behavior, diving, harassing or possibly even vomiting on a predator until it is driven from the area. There’s obviously a bit more risk to engage a predator head on, which is probably why jackdaws don’t simply rush out to take on every predator a neighbor might see in the area.

To test how the birds picked their battles, researchers recorded various scolding calls, then played them back to unsuspecting jackdaws. They found that the relationship between the listener and the bird sounding the alarm was key to a scolding calls’ success. Birds were very responsive to cries from their nest-mates, fairly responsive to members of the larger colony and less concerned about calls from neighboring colonies. Rooks, another species of bird often found near jackdaws, could get some of the jackdaws to respond, but they were clearly less influential than any jackdaw. The only other factor that seemed to shape responses was the sex of the warning bird– females from other colonies were somehow less persuasive than males.

Aside from highlighting the social nature of jackdaw safety measures, this research also demonstrates how well jackdaws keep track of individual relationships. Because the experiment only used audio recordings, the birds were evaluating the cries, and identities, of other birds by voice alone. So like humans, each jackdaw apparently has a distinctive enough voice to be used for quick identification, which can then inform their peers about potentially live and death situations.