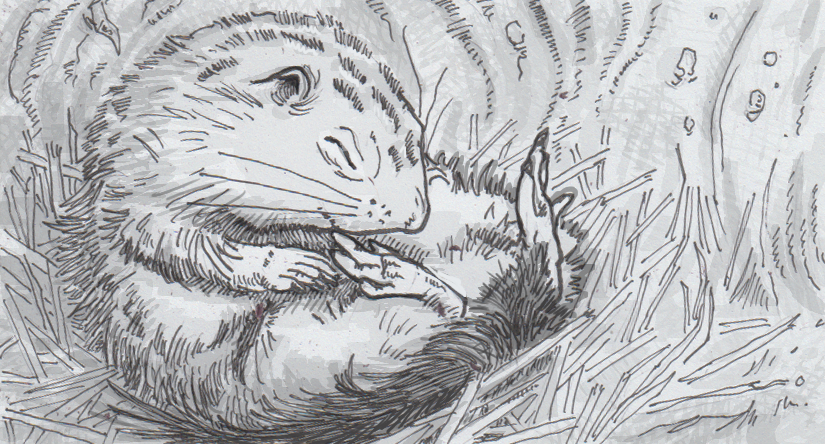 Hibernating seems so pleasant. As the days get shorter and temperatures lower, you just get to passively lose weight while doing nothing more than taking a really long nap. Well, except for the required changes in the body’s protein production, near comatose mental-state, increased risk of predatation, and partial destruction of your eyeballs. Throw in the fact that hibernation isn’t actually sleep as far as your brain’s concerned, and you’ve got quite the nap there.

Not every animal deals with hibernation in exactly the same way, but thirteen-lined ground squirrels (Ictidomys tridecemlineatus) certainly have a rough go of things. The small burrowing omnivores are thought to hibernate through the winter when succulent plants, which are their main source of hydration, are less available. During this period, they’ll shut down or alter bodily functions to such an extreme that they can be picked up and handled without noticing. This obviously carries some risk, since it leaves the squirrels open to attack, but physiological changes required for this kind of dormancy can’t be undone at the drop of a hat.

When the squirrels hibernate, their hearts beat only one or two times a minute. This lack of circulation would be fatal in a human, and the squirrels only survive it thanks to the temporary activation of genes that produce anti-coagulatory proteins. This stops the blood from clotting, and completely ending the squirrel’s metabolic functions, as slowed as they may be.

The squirrel’s eyes are another matter. During the warmer months, these squirrels have usually rich vision, with adaptations in their color-sensing “cone” cells to see more colors than most mammals. However, hibernation’s inactivity is hard on these cells, with the connections from the eyes to the brain decaying in the process. Amazingly, the squirrel’s vision does bounce back fairly quickly after hibernating, with each retinal neuron being restored to working order.

Humans aren’t about to start hibernating too soon, but we might be able to benefit from what the squirrels go through. Their eyes aren’t a perfect match for ours, but they share enough structural similarities that researchers are looking to use them as a model. The damage sustained during hibernation resembles the results of some ocular diseases, and so if we can figure out how a squirrel repairs its vision after a long winter, it may be part of this very rough nap that’s actually worth emulating.

Source: Squirrels Hibernate So Hard You Can Juggle Them by John Metcalfe, City Lab