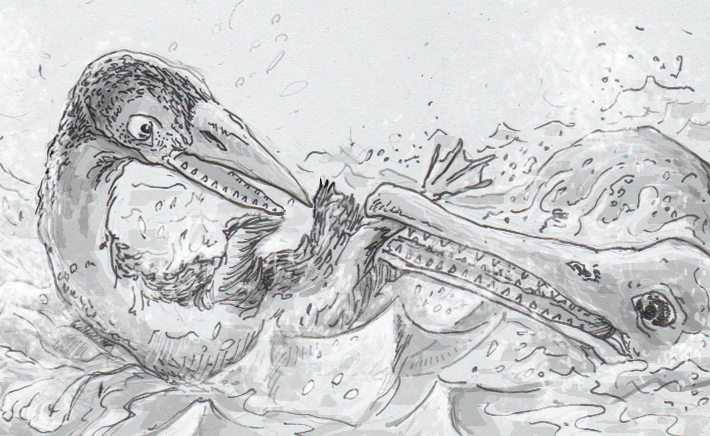 Piecing together who put their teeth in this Hesperornis’ leg

It’s not often that one fossil tells the tale of two different species, which is why paleontologists are excited about lone leg bone found in South Dakota over 50 years ago. The leg had been properly identified as a Hesperornis, an aquatic bird from the Cretaceous period, but a few critical details had been overlooked near its ankles. Researchers from the University of Kansas recently took another look at some unusual lumps near the bird’s condyle, finding that among the disfiguration were three, evenly-spaced tooth marks. Something had tried to take a bite out of this bird, but the Hesperornis lived to swim another day.

While the cone-shaped holes were evidence of the initial bite, the lumps around the bird’s leg connected to the foot proved that the Hesperornis survived the encounter. It appears the the bone had time to heal, which of course could only happen if the bit occurred while the bird was alive and stayed that way. Unfortunately for this Hesperornis, it looks like the bone also had time to develop osteoarthritis. The encounter most likely occurred when the bird was a juvenile, and the injury never really healed properly. The bones ended up rubbing each other, leading to the disfigurement.

But what bit the bird?

As exciting finding a fossil with signs of mostly healed injuries, the other half of this story is of course figuring out who did the biting. Since Hesperornis was a primarily marine species with smaller wings than a penguin, researchers started by comparing the tooth marks to various predators’ teeth in the ancient sea. Sharks were eliminated on the shape of the tooths alone, as the cone-shaped holes couldn’t come from the blade-like teeth of a shark. While mosasaurs had been found in proximity to other Hesperornis specimens, their jaw configuration didn’t really line up with the evenly spaced marks found in this fossil.

The best answer researchers could find was some kind of smaller, perhaps juvenile, plesiosaur. A blunt-nosed, short-necked species like Dolichorhynchops proved to be an excellent match, especially if it was a smaller individual. Comparing that mouth to the marks in the bone also indicated that the bite came from the bird’s side, although even with those details there are some big questions. Plesioaurs were thought to only eat small, quick prey like fish and ammonites, and so attacking a three-foot bird seems out of character.

Not a serious nibble?

While researchers are pondering an expanded menu for the marine reptiles, it seems (in my admittedly untrained opinion) that the survival of the Hesperornis may show that the plesiosaur didn’t intend to eat the bird. While Hesperornis beaks had teeth, the clean bite marks don’t seem like the bird fought the plesiosaur for it’s freedom in some kind of struggle. Maybe the bite was a quick test of who the bird was, similar to sharks giving “investigatory” bites? Or maybe it was a quick warning to stop pursuing the same meal the plesiosaur actually wanted? Both of those scenarios seem like possibilities for a single, relatively clean bite, especially against a bird that probably wasn’t looking for a fight against a predator that could grow up to 10 feet long.

Source: How a bird managed to escape a predatory sea monster by Robin Wylie, BBC Earth