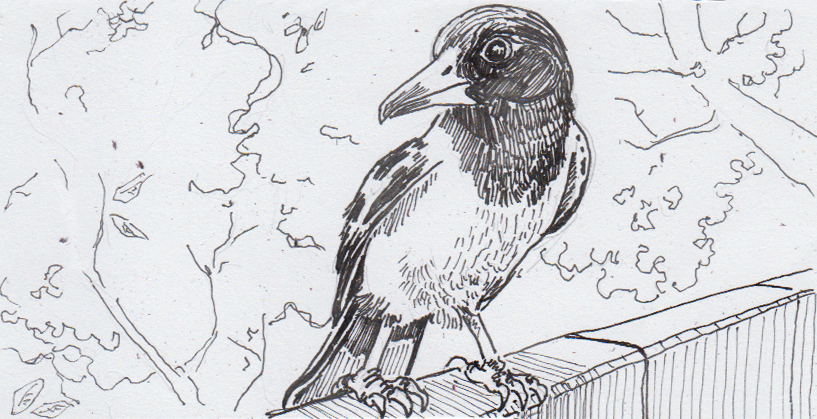 If presented the option, I’m guessing that just about anyone would rather listen to a bird tweeting than any song I could belt out. This is despite the fact that my human brain should supposedly give me inherent advantages over birds who communicate through song every day. Many people do enjoy the sounds of birdsong, but years of anecdotal appreciation don’t necessarily put these vocalizations on part with the degree of complexity found in human music. For that, scientists are carefully analyzing the output of avian maestros like the Australian pied butcherbird, trying to find objective evidence of musicality in birds.

Australian pied butcherbirds (Cracticus nigrogularis) are black and white birds around the size of a crow, with straight beaks and sharp but modest clawed feet. Their name is tied to their eating habits, which often involves wedging the insect or small vertebrate they’ve captured in the nook of a tree branch, then “butchering” it it with their beak. They often live in small families, with chicks staying with their mothers for a year, sometimes even staying to help care for younger siblings. None of these activities are especially musical though, which of course is where their amazing singing and vocal mimicry come into play.

Pied butcherbirds’ singing stands out among other songbirds for its complexity and versatility. Their songs can vary greatly, and they seem to respond to other sounds, and singers around them, seemingly engaging in improvised duets with other birds, even of other species who probably don’t realize they’re participating. Closer analysis of butcherbird singing has found that as they sing more complex songs, their rhythmic time-keeping actually improves. When they do react and incorporate other local singers into their rhythms, they hold a consistent balance between repetition of their core melodies and a bit of variation, almost like a jazz musician.

This doesn’t prove the birds necessarily appreciate music in the same way we do, but it does indicate that they are active listeners, demonstrating an interest in complex songs over broadcasting a single tune. Complex songs are thought to be a way for a bird to demonstrate their reproductive fitness, since they’re presumably more taxing to produce than a four-note pattern. For butcherbirds, standing out among other good singers may have pushed the birds to develop their songs more and more, allowing them to reach a level of vocal mastery that someone like myself could only dream of.