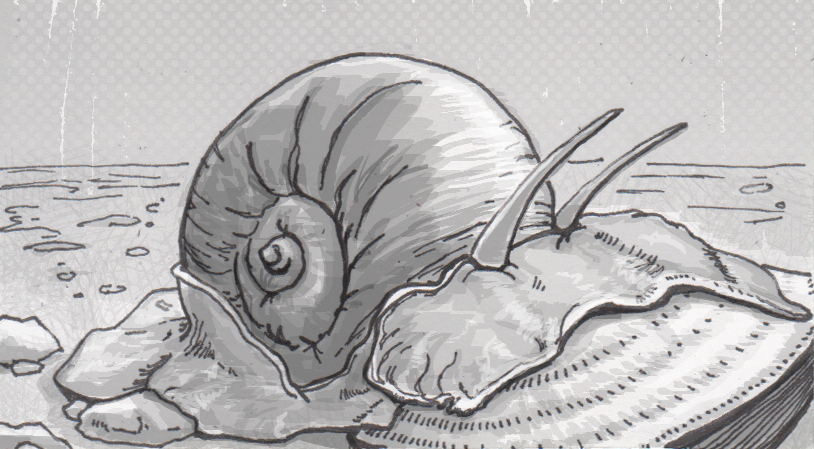 It seems like common sense to assume that over time, bigger predators can dominate their local ecosystem more than smaller ones, but common sense isn’t enough for scientific study. To really prove this idea, researchers needed a consistent mode of predatation that could be compared over time, encompassing a variety of hunters, so that size was the primary variable being tested. Flashy attacks like shark bites or lion claws would therefore be hard to quantify in this way, but the patient, slow attacks of sea snails on shelled prey turned out to be the perfect way to test if bigger is better.

Predatory snails, forams, octopuses and more have been drilling holes in shelled prey since the Ordovician Period,  488 million years ago. Animals like brachiopods, clams and mussels have all been found in the fossil record with small, precise holes, bored into them by the aforementioned predators in order to extract the softer bodies that lived inside. This strategy is still in use today, and modern predators prove that larger attackers leave larger holes. With all these reference points, researchers could then quantify just how much predators did or did not change in size over millions of years, based on the size of the holes they left in the fossilized shells.

It turns out that the data backs up the initial hypothesis. The average hole was 0.35 millimeters 450 million years ago, but is now up to 3.25 millimeters— an increase of over 900%. This doesn’t mean that modern snails are 900% bigger than their ancient ancestors, but it is a safe bet to say that evolution favored their larger family members.

As much as the point of attack has gotten bigger, the exact mechanics behind boring into a shell aren’t thought to have changed all that much. Marine snails, for instance, switch back and forth between excreting enzymes to soften their prey’s shell, then drilling into it with the abrasive teeth that line their “tongue,” better known as a radula. Once the hole is made, the squishy, nutritious body of the clam or mussel is sucked out to be devoured, only now that can happen through a larger hole.

Interestingly, some of this increase in predator sizes may have been promoted by prey. The early brachiopods had less meat in their shells hundreds of millions of years ago, but they were later eclipsed by clams and mussels, both of which offer more nutrition to a predator. This meant that the slow process of piercing a shell was actually more profitable, enabling predators to grow larger more easily. The main catch would be that as these boring predators grew larger, they probably put themselves on the menu of other predators, like fish and crabs. So while bigger may be provably better from one perspective, it seems to have come with its own set of compromises.

Source: Marine predators bulked up over eons to dominate their prey by Robert Sanders, Berkeley News