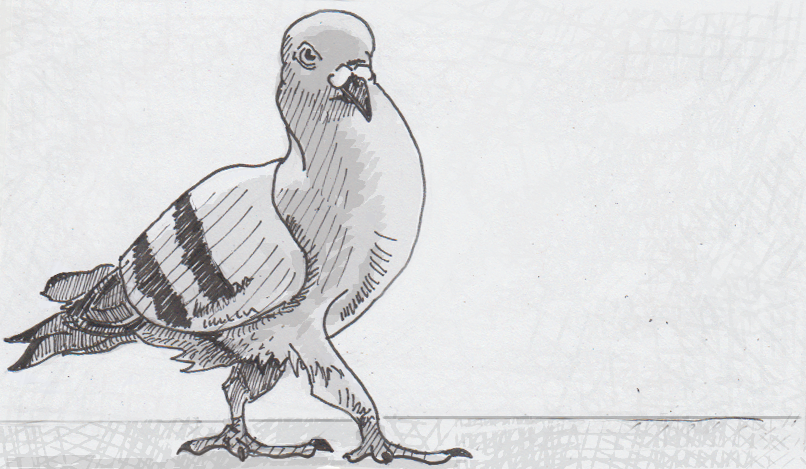 Pigeons’ gait turns their head into a steady-cam

As an adult, I’ve seen enough pigeons just take their mannerisms for granted. They just do pigeony-stuff because they’re pigeons, right? But today my kindergartner was watching some bobble along the sidewalk and asked “why do they walk like that?” It turns out it’s to help them see.

Everyone who’s moved their camera while the shutter’s open knows how it can leave you with a blurred image. Our eyes aren’t all that different— it’s hard to focus if you’re eyes are getting shaken too much by say, walking down the street. Most mammals deal with this with tiny, involuntary twitching of your eye (with some coordination with your brain’s movement centers.) Pigeons, and a few other birds like chickens, don’t handle this process at the eye socket. They stabilize their vision at the neck.

The strut that provides stability

As pigeons walk they lock their eyes, and therefore head, on a target, and then let their body catch up to that new position. As this quickly repeats over and over, it appears that the pigeon is bobbing their head around. To prove the real cause and effect of this process, pigeons have been observed on special treadmills to study their gait. Since their field of vision wasn’t really changing while their legs walked, they didn’t need to be re-centering their heads constantly, allowing them to totally avoid doing the pigeon. This all might seem like a ridiculous way to solve a problem with one’s vision, but for the anatomy of these birds’ neck muscles, it’s actually efficient. Or at least, efficient enough.

My kindergartner asked: Well, she didn’t ask much here, as much as she repeatedly jumped out of bed to demonstrate her version of pigeon-vision, which actually looks even sillier than the birds themselves thanks to having a proportionally tiny neck to stick out. Best for us humans to stick with the eye muscles, I think.

Source: What’s Up With That: Birds Bob Their Heads When They Walk by Nick Stockton, Wired