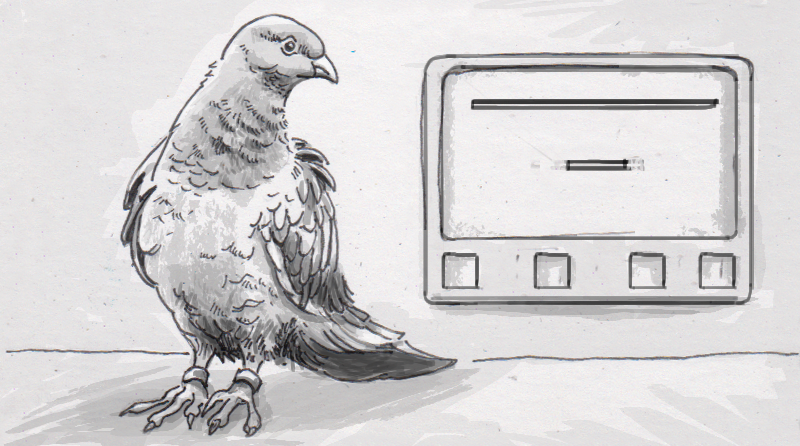 Thanks to a test of pigeons’ sense of space and time, researchers may be casting doubts on the evolution of human brains. That’s not a knock on the people studying pigeons— these birds are capable of a lot, right down to helping diagnose cancer. The issue is that the birds seem to have a quirk in their perception that has previously only been seen in primates like us. It’s been understood to be tied to the specific structures in our brain that assist with processing spatial and temporal information, but that can’t be the case with these pigeons, because their brains simply don’t have any of the structures in question.

How long is a line, and how long does it last?

The first phase of this test trained pigeons to watch a screen, and then poke a response on a touch screen in order to earn a snack. When looking at a two-inch line and a nine-inch line, they needed to select the longer option. When lines were flashed on the screen for either two or eight seconds, the birds needed to choose the shape shown for the longer duration. This was nothing to sneeze at, but it was only the training for the real testing in phase two.

Once the pigeons seemed comfortable with looking for lengthy lines for longer time periods, researchers complicated their task by mixing in more intermediate choices. Instead of the seven-inch difference between the first sets of lines, the birds now had to consider lines that were only off by one inch. The attribute that was being tested was also less clear, with length and duration both being tested at random. This forced the birds to really pay attention to both space and time, which lead to some interesting blurred lines in their perception.

As the pigeons progressed, a pattern emerged that showed how their brains handled this spatial and temporal information. When the birds saw a longer line, they were also likely to react to it as if it were on screen longer. The reverse was true as well, with lines displayed for longer amounts of time apparently appearing lengthier to the pigeons as well. It may sound strange on paper, but as a primate you’re probably more familiar with this than you might think, as we do this too. The major difference is that we do it thanks to both types of information being processed in the same place in our brains— the parietal cortex in our cerebral cortex. Without such a structure to mash that information together, why does pigeon perception seem to work the same way?

Explaining the overlap in pigeon perception

There are two hypotheses at this point, and both of them reduce the prestige of a primate’s parietal cortex. The first hypothesis is that pigeons, and probably other birds as well, evolved similar cognitive abilities independently of mammals, essentially reproducing what our primate brains do in these tests, right down to the errors. This kind of functional overlap does occur in what’s called convergent evolution, but not usually to this degree of specificity. The strikingly similar overlap in pigeons’ spatial and temporal perception has with primates seems unlikely to have occurred by chance, particularly without any clear evolutionary benefit to promote its growth in two family trees.

The second explanation is that this mental circuitry evolved once, long ago in a common ancestor, and bird and mammal brains have just packed it into different structures in our brains. So instead of using a parietal cortex, those circuits, quirks and all, were packed into birds’ palliums instead. The catch here is that mammals haven’t shared an ancestor with birds for millions of years, meaning this specialized perception has been getting passed down through a lot of different species, well beyond the chimpanzees and pigeons we’ve tested. Since the underlying structure that handles this thinking might not be exclusive to primates, it suggests that some of our amazing cognition just needs to be properly tested in other animals.

Source: Pigeons can discriminate both space and time, Iowa Now