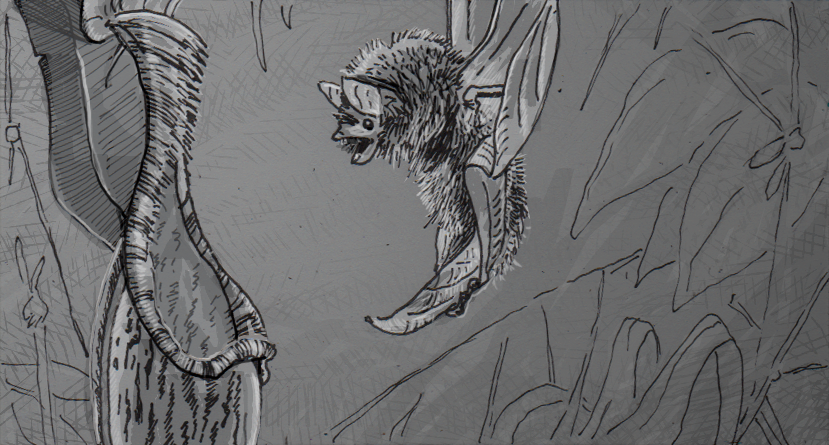 Pitcher plant positions itself as potty for woolly bats of Borneo

If you’re a plant in the swampy jungles of Borneo, it’s tough to get enough nutrients to grow. Specifically, things like nitrogen are hard to come by, and so carnivorous plants have turned to insect flesh as a nutrient source, trapping the bugs in sticky bristles or down in digestive fluid at the bottom of a pitcher-shaped leaf. Sometimes that extreme tactic isn’t even enough, and so one plant, Nepenthes hemsleyana, has adapted to collect its nitrogen from yet another source: bat poop.

Poo as a dietary supplement (for plants)

Using animal poo as a source for nitrogen isn’t actually that novel a concept for plants. Gardeners around the world have been using manure to help their plants since farming was coupled with domesticated animals, especially from birds. What’s unusual about N. hemsleyana is not that nitrogen is being collected from feces, but how it’s managed to start collecting it.

Rather than wait for a passing chicken, cow or benevolent gardener, N. hemsleyana has repurposed its pitcher to become a roost, and therefore toilet, for woolly bats (kerivoula hardwickii). The volume of digestive enzymes and insect attractants is much lower than other pitcher plants, while the shape of the pitchers has become more bat-friendly as well. Aside from being large enough for a bat to snuggle with her pups, the leaves are were found to be excellent ultrasonic reflectors, perfect to help the plant stand out among the dense, leafy chaos of a jungle visible only through echolocation.

Confirming the relationship with a robot

To confirm the pitchers really were adapted to be sonic beacons to the bats, scientists took a robotic bat head, with accurately-proportioned mouth speakers and microphone ears, though the jungle. When aimed near N. hemsleyana, the sound was found to be reflected back at the robo-bat quite effectively. Another set of tests involved modifying N. hemsleyana leaves in various ways, such as changing their curves, lengths, etc., and seeing if the bats were any less attracted to them. This way, researchers could rule out that the bats were being invited by a chemical lure since the changes would primarily affect the acoustic properties of each pitcher. As predicted, unaltered plants attracted more woolly bats, further solidifying the idea that the plants and bats are truly in tune with each other.

The relationship hasn’t been completely one sided. For their part, the bats were found to have the highest-pitched voices of any known bat. These pitches wouldn’t be necessary to help find prey, but they would be especially well suited to reflect back from the leaves of N. hemsleyana in the clutter of the jungle.

Source: With Sonar-Reflecting Leaves, Plant Lures Bats to Poo in it by Ed Yong, Not Exactly Rocket Science