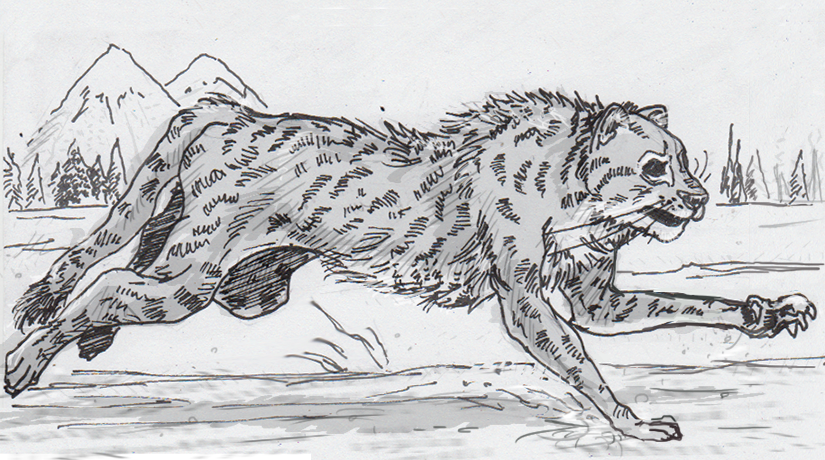 Pleistocene cheetahs turn up in the darnedest places

When you picture a cheetah, you likely think of an animal racing with breathtaking speed across the plains of Africa. Each amazing step looks more like a leap as it bounds after its fleeing prey. You probably don’t imagine such a creature falling into a large hole in the ground and dying in Wyoming.

Until the 1970s, nobody really considered that image. A giant pit trap, 80 feet deep, in Bighorn Canyon, Wyoming, has helped change that though. While prior evidence suggested the existence of a North American species of cheetah (Miracinonyx trumani), well-preserved remains from this cave have helped fill in more details on this large, predatory cat from 19,000 years ago. A variety of animals have been excavated from this location, thanks to the swiftness of their deaths in a pit that prevented their bodies from being disturbed by the usual sources of scavenging and weather. It’s slightly tragic (and maybe a touch comedic) to picture a swift creature like this falling to its death in a hole, but it has been a boon to paleontologists who have even been able to extract segments of DNA.

This DNA has helped us understand the cheetah’s family tree, particularly its relationship with modern, African cheetahs (Acinonyx jubatus). Analysis suggests that the two species were not descendants of each other, but did share a common ancestor. This ancestor’s genes may have predisposed them on their paths to speed, but their various adaptations for running are a case of convergent evolution.

Convergent evolution, in this case, would mean that neither species passed long, sprinter’s legs to the other. Instead, circumstances in their ecology, such as fast-running prey, reinforced the benefits of being a speedy predator, pushing the two species in that direction independently. To over-simplify just a bit, both cheetahs eventually found the same solution to the problem of antelopes running away from you, be they pronghorns or Thomson’s gazelles.

Looking down the puma family tree

So who was the common ancestor to cheetahs living on different continents? Cheetahs are in the Puma family, which has members spread out around the world. The story gets even more complicated thanks to remains found at the Grand Canyon that have been attributed to Miracinonyx trumani, although those may yet turn out to be another Pleistocene puma relative. In the end, we may need to look to the Eurasian cat Puma pardoides as a starting point, meaning Miracinonyx trumani was the world traveler of the family.