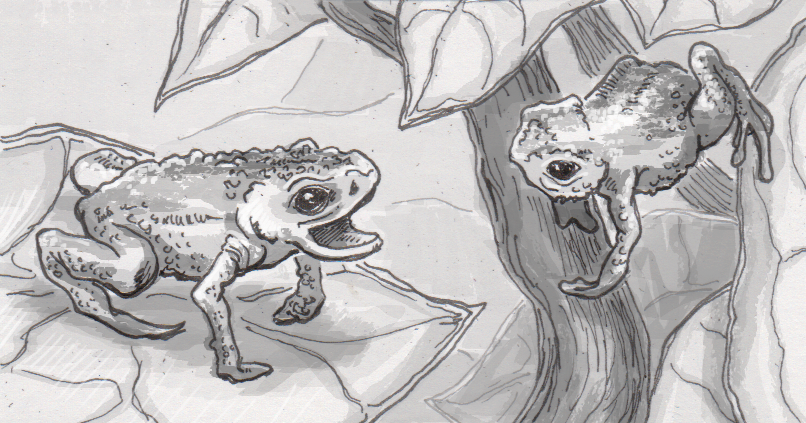 Poisonous frog adaptations block harm from their toxins, as well as hearing their own voices

Anthony’s poison arrow frogs (Epipedobates anthonyi) aren’t cannibals, but they still need to defend themselves against the potentially lethal toxins found in the hundreds of poisonous frog species around the world. Toxins like epibatidine course through their bodies to scare off predators who want to avoid things like hypertension, seizures and of course, death. These neurotoxins pack a punch to just about any species, and the only way the frogs can safely carry them is thanks to some specific adaptation that let their brains continue functioning while blocking the toxins they naturally create. It seems that the real trick to being poisonous is figuring out how to survive your own defenses.

Part of what makes epibatidine an effective toxin is that it attacks nervous systems in a way that’s universally applicable to most predators. Nerves are triggered in a number of ways, including proteins that fit into special receptors built into the cell membrane. Once the receptor is activated by the right protein, it triggers activity in the cell that can help produce a larger physiological event, like joining with other cells to record a memory. The epibatidine essentially hijacks this process, fitting in cell receptors to activate them, but without any natural “off” mechanism. The cellular activity then runs off the rails, causing all kinds of problems if enough cells are affected at once.

Since the frogs would like to keep the use of their nervous systems under control, they’ve evolved slightly unusual receptors in their nervous systems. This lets them continue to function like other animals, except the epibatidine doesn’t fit in the frogs’ cells to do anything. In retrospect, it’s a fairly straight-forward solution to being filled with toxins, and has evolved at least three times in frog lineages, although it’s obviously unusual enough that most creatures aren’t packing poisons to make themselves inedible.

Ignoring one’s own poisons aren’t the only thing poisonous frogs have been found to block out. Pumpkin toadlets (Brachycephalus pitanga), a tiny orange frog from Brazil, can’t hear their own calls. They’re not deaf, but they’ve evolved to have ears that can’t detect the frequency of their own voices, leaving them able to hear their surroundings but not each other. Many frogs and toads depend on vocalizations to find mates, so figuring out how these tiny frogs persist as a species has not been an obvious task.

After confirming that the frogs can’t hear each other croak, researchers now suspect that the frogs have just become very visually oriented to compensate. Like some other frog species, they use gestures to court and communicate with each other, and some of those movements stem from the calls their ancestors used to listen to. As a result, some movements inadvertently make sounds, even if the real goal is to look good. It’s a reminder that evolution isn’t always perfectly efficient, as it only needs to work well enough to further a species’ reproductive chances. For many animals, making sounds you can’t account for would probably be a problem, but the pumpkin toadlets’ internal supply of poison apparently keeps them safe enough to keep sounding off without even knowing it.