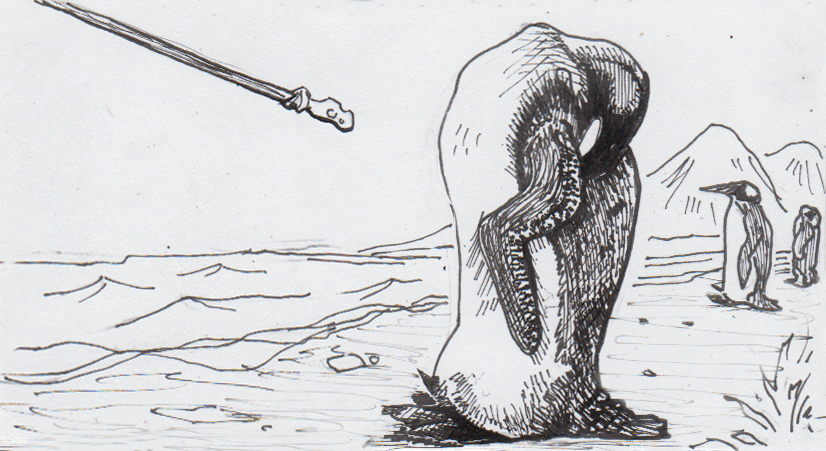 Eagles, owls and even pigeons have made birds famous for their eyesight. Complex songs and vocal mimicry demonstrate their sophisticated use of sound. But what about smell? Ancient theropods, like Tyrannosaurus Rex, were thought to have large olfactory bulbs and presumably the strong sense of smell found in many predators, but what about modern species? Do chickens smell subtle details in their feed? Do vultures smell carrion before they see it? Do penguins find each other with their noses?

This last question was recently investigated with a population of king penguins (Aptenodytes patagonicus) on the Kerguelen Islands. Penguins are known to listen for specific calls to recognize and find their mates during nesting season, but researchers wanted to know if they could possibly use smell to help identify each other as well. As a first step in that investigation, they had to find out just how sensitive the birds’ sense of smell was in first place, at least as far as other penguin smells were concerned.

To test the penguins’ sensitivity to each others’ smell, researchers needed to find a way to gauge their interest in penguin smells that wouldn’t be muddled by a reaction to seeing a human standing there watching them. The answer was to offer smells to sleeping penguins, and see if the smell was detectable and interesting enough to rouse them from their naps. To minimize the human influence, different materials were attached to the end of metal rods before being waved under the penguin’s beak. The control material was sand common to their nesting area to be compared to a wad of penguin feathers and the more extreme wad of penguin poop.

As a human, it’s quite unsurprising that the smell of your own poop on a stick could arouse a response, but good science can’t rely on our own experience to be universal to all animals. There’s evidence that penguins use smell to help their fishing, but they have such a sophisticated way to identify each other with sound that it would have been completely conceivable that they wouldn’t dedicate any developmental resources to sniffing other penguins. And they still might not- further tests are needed to see if their sense of smell can recognize specific penguins, or if they just recognize a generalized penguin smell… on a stick.