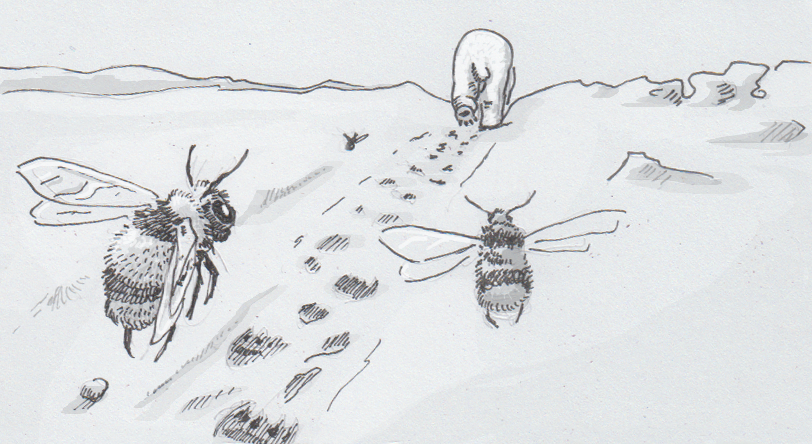 Polar bears and bumblebees both share info through fragrant footprints

What do polar bears and bumble bees have in common? It’s probably not a pairing you’ve really considered, considering the differences in size, diet, habitat, taxonomy, etc., but both animals have been recently discovered to share an interesting communication strategy. Both bees and bears leave informative scents in their footprints in order to share information with members of their species. The precise messaging doesn’t appear to be the same, but it looks like odorous footprints may be a good way to leave a message when you can’t stick around to say it in person.

Marking flowers with their feet

Bumble bees (Bombus terrestris) seem to leave their scent to help other bees forage more efficiently. Bees need to make the most of their time and energy each day, and so they employ a few different tactics to help avoid going to flowers that might not have nectar. Their footprints apparently contribute to this, marking a location with a record not only of a bee’s recent visit, but also the identity of that bee’s family.

In experiments, it wasn’t clear if the bees inherently had a strong preference for any particular foot smells. Using artificial flower-proxies doped with different foot-smells, researchers were able to train bees to associate different scents with food. For example, bees were trained to expect more sugar in the fake-flowers that smelled like family members than with unrelated bees. That pattern was later reversed, with the bees responding in kind. They could clearly keep track of scents from other bees, but this didn’t explain what pattern the bees normally expect in the wild.

The motivations of the polar bears (Ursus maritimus) became a bit more obvious. Wild bears had their feet swabbed, and then those smells were presented to captive polar bears in “scent boxes.” Most bears were interested in the smells of each other’s feet, but the biggest responses all seemed tied to potential mates. At the far end of the spectrum of responses, male bears in springtime were the most excited to sniff fertile female feet. In the sparse arctic circle, it looks like single polar bears find each other by leaving a scented trail everywhere they walk.

Given the importance these scents likely play in reproductive success, it’s not surprising that the bears’ bodies make sure to make an impression. While most bear species can mark trees when they rub against them in the woods, polar bears have prominent oil and sweat glands in their feet to make the most of each footprint, maybe with a bit of pee for good measure.

So are humans missing out by wearing socks and shoes? Our feet are generally smelly thanks to how our sweat promotes bacterial growth throughout each day. There’s a chance that that bacteria could have a unique signature to it that could be used for identifying family members or potential mates, but our sense of smell might not be up to it. While not terrible at their job, our noses just aren’t very close to the ground to pick up what may be very muddled scents from other humans. We do communicate with body odor to a degree, but those key odors usually emanate from higher in the body.