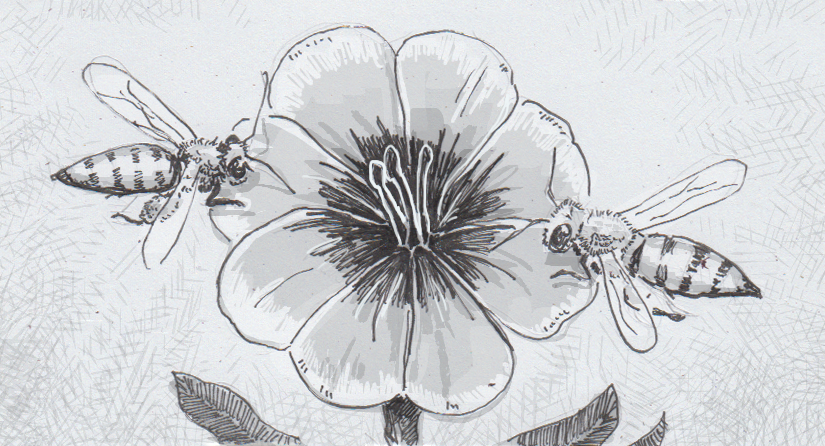 Tulips have been cultivated by humans for hundreds of years, captivating us enough to have once triggered wild, speculative trading in the 1600s. They come in a variety of colors, sometimes with beautiful, contrasting patterns on the interior of their long, elegant petals, and have been included as motifs and symbolism in art around the world. This is all lost on their original audience though, who really just say all this adornment as the botanical equivalent of a neon sign flashing “EAT HERE” in the window of a diner. For all their beauty and delicacy, a flower’s first job is to advertise.

Originally, flowers didn’t stand out from other flora all that much. 100 million years ago, they likely came in a dull yellow or green that would be pretty uninspiring among the blooms we have today. They did stand out enough to be visited by ancient bees though, which proved to be such a beneficial relationship that flowers started evolving to be more and more appealing to their insect partners. Bee’s don’t have the strongest eyes in the animal kingdom, with rather pronounced nearsightedness and no red perception, but flower coloration adapted to work with what the bees can see.

The evolutionary pressure from bee-vision helped shape the large swath of blue, white and yellow flowers we have today. Bees can see all these colors, plus ultraviolet light that our eyes completely miss. So while some flowers seem to have a simple, monochromatic appearance to humans, they may have more complex patterns visible to a bee. These patterns often highlight the locations of stamen, so that the bees will be more likely to come in contact with the flower’s pollen, transporting it and fertilizing the plants. Once in range, electric fields may seal the deal so a bee knows which flowers are worth visiting.

As successful as these markings proved to be, some flowers apparently found you can’t always depend on bees for pollination. To diversify, some species evolved colors that would attract attention from other animals, like birds. Hummingbirds, for instance, act as pollinators, and like many species of birds, can see all the colors humans can, plus a bit of the ultra-violet frequencies as well. This would mean that red-hued flowers that might be missed by bees probably stand out to birds (although that doesn’t mean that birds actually favor red flowers over others.) For a flower competing for attention in the wild though, any visitor is better than none.

Beyond bees and birds, many other species have developed their own dynamics with flowers around the world. Flies, wasps, bats and even lemurs are all lured by their favorite flower, and some of these relationships have become extremely specialized. Humans have also been attracted to the bright color of many species of flower, and now cultivate seeds even though we’re usually not getting any food out of it directly. The ultraviolet pattering is of course lost on us, but the aesthetic value of bright colors has clearly spurred humans to help in the reproductive success of many plant species.