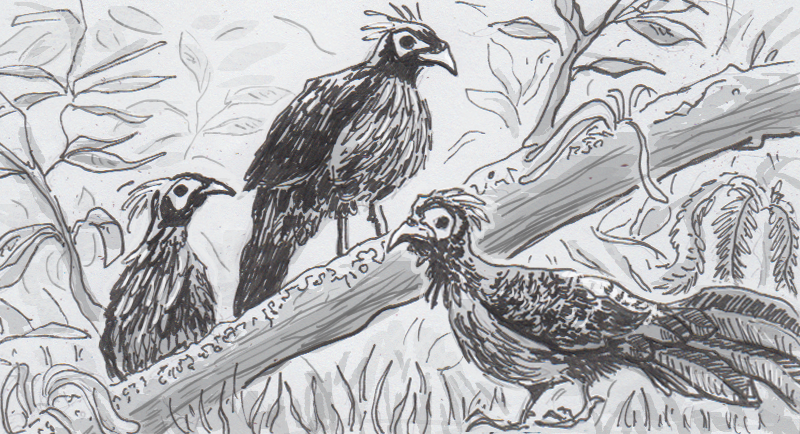 When the going gets tough, the tough learn to cooperate. Of course, it doesn’t hurt when the supposed hardship is that you’re living in a place with no serious predators and that your family is basically doing too well. These are the not-so-dire straights Hawaiian Kalij pheasants (Lophura leucomelanos) have found themselves in, where they’re doing so well they’re basically running out of space. Rather than collapsing into disarray, the birds seem to be rising to the occasion as best they can, inventing new ways to cooperate as a group in order to make sense of their growing population.

Recent observations have found an unprecedented integration of male pheasants living in Hawaii’s Volcanoes National Park. The birds have had no real checks on their population growth since being brought to the island in the 1960s as a game bird, but the size of the island has prevented the flightless birds from expanding their range. Instead, they’ve apparently found a way to just increase their population density, giving young male birds new roles as the pheasants become more cooperative in their caretaking strategies. So rather than heading out to start their own families in new territory, young male birds are sticking around the group, watching over chicks that might not even be their own.

This is a big shift from the behavior of Kalij pheasants in their native southeast Asia. In most cases, males will head out to start new families, leaving nesting primarily to the hens. The pheasants are a precocial species as well, meaning they’re developed enough to basically fend for themselves if need by by the time they hatch. So the Hawaiian counterparts are rewriting the social order rather significantly, from rules of the male hierarchy to the amount of care being bestowed on each individual chick.

While this might seem like the younger, more subservient males are the ones doing all the compromising, this new cooperative arrangement requires some changes from the top of the pecking order as well. Older, dominant males still sire the most chicks, but the younger males aren’t locked out of mating altogether. Some of their caretaking can be devoted to some of the few chicks they’re able to father along the way as they wait patiently to take over a more prominent place in the bouquet. Assuming there’s any space left on the island by then.