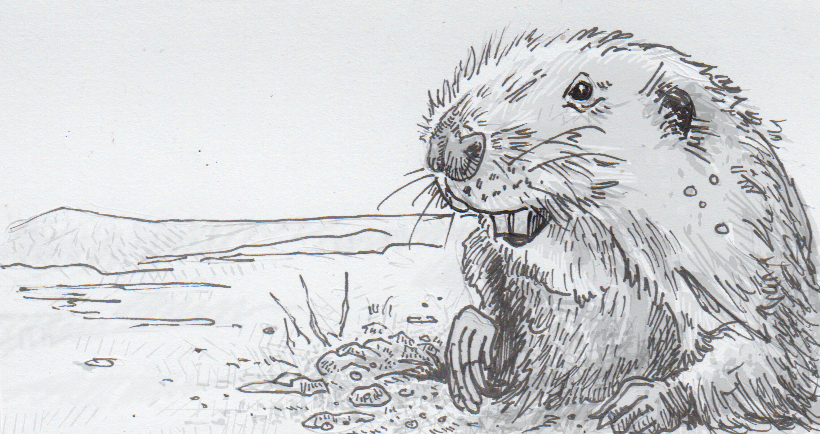 Prairie beavers who once made their home in holes

While technically a beaver can be defined according to its genome and anatomy, those attributes don’t necessarily capture the essence of a beaver. The aquatic mammals have often been dubbed the engineers of the animal world, mainly for the amazing lodges they build. Aside from providing safe, relatively comfortable dwellings, these structures also reshape the the rivers they’re built on, making a strong impression on their environment. Looking back at some ancient relatives of the Castor genus, this propensity to build striking homes seems to be a critical, common thread in the family tree, even if those homes were sometimes directed into the ground instead of out on the water.

The homes of the ancient beaver Palaeocastor were quite baffling when first discovered as trace fossils in the American Midwest. Instead of finding the actual homes, people were coming upon fossilized casts of their underground burrows. An inverted burrow probably would have gone unnoticed as yet another rock if it weren’t for the particular structural innovations Palaeocastor put on them— they were giant corkscrews. Rather than dig in a straight line down into the ground, Palaeocastor must have dug in a spiraling column as far as nine feet under the ground. The fossilized cast of these impressive burrows were then given the understandable nickname of “devil’s corkscrews,” since nothing else had ever been seen to connect such an object to the home of an extinct mammal, much less a 22 million-year-old beaver.

Palaeocastors weren’t especially large, and mostly resembled a cross between a modern aquatic beaver and a gopher. They lacked their modern relative’s distinct, flap-shaped tail, but they did have the telltale, over-sized front teeth, which is part of how they were ever connected to their amazing burrows. Early examinations of the burrow casts found pieces of twigs and plant materials embedded in them, raising the possibility that they were actually bizarre root structures. This theory was discarded when rodent bones were discovered inside, especially since they could be matched to the scratch marks also found along the outer surface.

Those scratch marks were evidence of digging, showing that these structures had been excavated by the some of the rodents inside. However, as these were beaver dwellings, the scratches were eventually proven to be from the animal’s teeth, rather than their claws like a gopher or rabbit would have done. Like their modern counterparts, Palaeocastor put their mouth to use for their construction projects. Burrowing face-first may explain the spiraling shape, as it may have helped Palaeocastor push dirt out behind it. Other possibilities include making the homes less accessible to predators, almost like a modern beaver dam obscures its entrance in the water. Also like their modern cousins, this beavers added a few pleasant flourishes to the floor plan, including side pools that would collect water and keep the main dwelling all the more comfortable.

Source: The Beaver That Didn’t Give a Dam by Nicholas Lund, National Parks Conservation Association