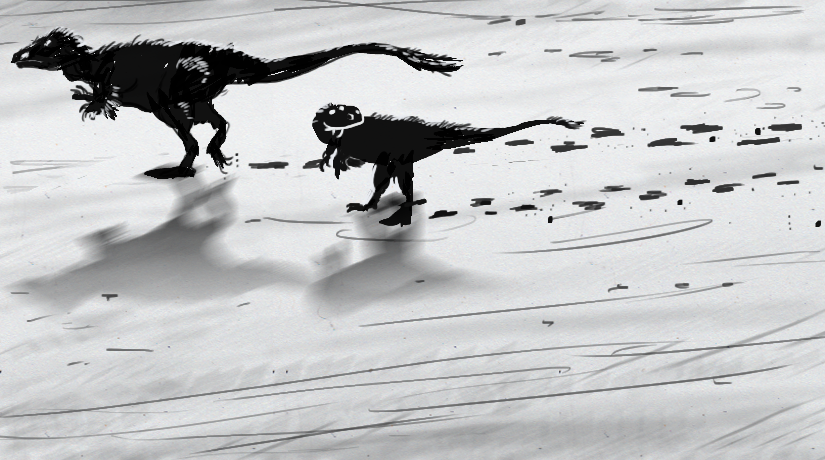 Predators’ prints may hint at prehistoric parenting in therapods

While most fossils act as records of an organism’s size and shape, trace fossils, such as footprints, record events. These events can reveal how animals carried themselves, possible struggles and chases, or maybe something a bit more casual. Footprints found in Germany appear to have all the drama of Sunday stroll, but they may also demonstrate significant aspects of dinosaur behavior.

50 footprints were found tracing the same route across what would have been a beach 142 million years ago. Both sets of tracks belonged to therapods, with the larger probably around 5.2 feet tall, while the smaller was 3.6 feet tall. Based on their estimated heights, the distance between tracks and the depth of the imprints, it’s been determined that these predators probably weren’t out for a hunt. Their pace couldn’t have been more than four miles per hour, slightly faster than your average human.

While it should be expected that we find tracks from uneventful days in the lives of dinosaurs, the smaller prints do offer some more clues about what was happening on the beach that day. The smaller therapod seems to have been slightly faster, but also slightly more erratic. At one point, it’s feet crossed over each other, almost like it slipped. Assuming the two therapods were on the beach the same day (which may not be the case,) it’s hard to not start to compare these details to my own experience as a parent.

The most interesting explanation for these tracks may also be the most relatable, at least for parents of small children. The smaller animal may very well have been a younger member of the species, excitedly trying to keep pace with a parent. With occasional distractions along the way, human children certainly have no trouble coming up with reasons to fall behind, catch up, or just slip for no discernible reason. With the evidence available, it doesn’t take much imagination to see ancient therapods behaving the same way.

This narrative would then support existing evidence we have of some dinosaurs living as social animals, especially when it comes to raising young. Communal nesting grounds have been found for various species like Maiasaura and Massospondylus, and if these tracks can be prove to be contemporary to each other, we may be able to add some therapods to that list. Therapods beyond modern birds, of course.