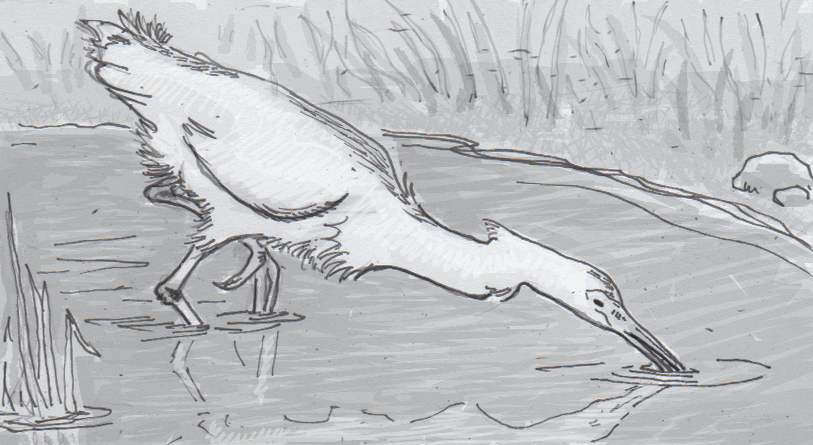 Predators that trap their prey with their titillating tongues

My second grader has recently discovered that she can, amazingly, touch her tongue to the bottom of her nose. This isn’t as attractive to look at as I think she thinks it is, but she’s not completely crazy to think that sticking out one’s tongue is a good strategy to get attention. The strategy of entrancing other’s with a well-flicked tongue is successful enough in the animal kingdom to warrant the title lingual lures, and it’s used by everything from snakes to turtles to birds like the snowy egret.

The snowy egret (Egretta thula) is an appropriately white heron. They can hunt for food by flying low and scooping prey out of shallow water, or by wading through marshes or swamps to catch anything from small crustaceans to frogs to mice. When they’re not in the mood to chase down prey, they’ve also been observed luring it in towards their mouths with their tongues. By repeatedly flicking their tongue in the water, egrets have been seen drawing in small fish, and then quickly striking at them in the water. Presumably, the birds’ tongues are able to mimic some form of food that the fish are interested in just long enough to turn them into food themselves.

Seduced by a snake’s tongue

While lures are just one of the snowy egret’s hunting strategies, snakes like the puff adder (Bitis arietans) specialize in them. The vipers carry very potent venom, but because of their relatively limited striking distance of no more than four inches, they need to lure prey in very close to successfully capture a meal. To this end, they rely on camouflage, patience and of course, their tongues.

Using radio tags and automatic cameras, scientists were able to observe puff adder attacks without disturbing their hunting strategies. The found that when an amphibian, like a frog, was nearby, the adder would hold it’s flicking tongue out of its mouth for up to 30 seconds at a time, much longer than it would need to smell the surrounding area. The tongue then seemed to draw the attention of the frog, allowing the snake to strike. Interestingly, the adders did not employ their tongues when engaging small mammals. Further research may be needed to see if those targets are better drawn in by the snake’s second lure, which is on the tips of their tails.

My second grader said: My tongue does help me catch things to eat when I stick it out! My boogers!

…like I said, not as attractive as she thinks it is.

Source: A lure at both ends - puff adders leave nothing to chance, Scienmag