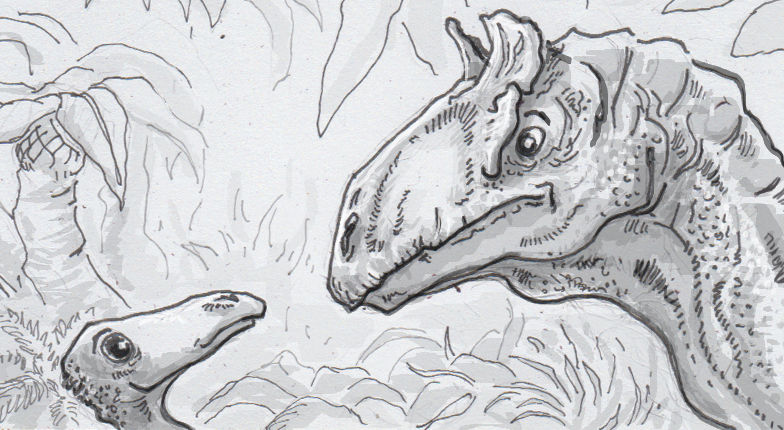 Predatory dinosaurs size tied to the bony crests on their skulls

Giant theropod dinosaurs often catch our attention because of their massive mouths and teeth, but back in the Mesozoic era, many were turning heads with the ornamentation on top of their skulls. We don’t know if the outer appearance of these crests, spikes and knobs looked like bare keratin, like  moose antlers, or were covered in colorful flesh, similar to a rooster’s comb, but they were apparently attractive in some way to large predators. These appearances seem to have made an impact though, with the evolution of crests correlating strongly with the evolution of larger and larger theropods, like Cryolophosaurus and Giganotosaurus. The question that emerges is that is crests were great for big predators, why were smaller theropods keeping a lower profile?

The most likely use for these bony knobs and horns was to attract attention of other dinosaurs, particularly possible rivals and mates. In many modern animals, eye-catching lumps on the head are used to signal their bearer’s health and status, with bigger crests being the more desirable option. A review of over 100 theropod species found that lineages that evolved head ornamentation usually started evolving much bigger bodies than theropods with simpler skulls. The split was fairly stark, with species that were 80 pounds or less remaining crestless, while 20 of the 22 largest species sported some form of bony adornment.

The advantage of putting crests on bigger bodies isn’t completely clear. Aside from a bigger body being more likely to grow a larger and therefore more impressive crest, paleontologists are also considering how these souped-up skulls would have been more visible over larger distances, and how stiff bone wouldn’t have waggled around too much as it got bigger and heavier, compared to softer, more flexible growths. To look for more clues to this pattern, researchers are considering the elaborately-crested hadrosaurs, since our modern examples of dinosaurs don’t follow this pattern too well.

Birds today obviously carry some amazing ornamentation on their heads, but they do so without any bone-to-size correlations like the majority of theropods in this study. The reason the various raptors that lead to our modern birds skipped bony crests at any size was most likely that their feathers could do the job while being lighter and more flexible, at just about any size. Aside from oviraptors which did try out a bit of ossified ornamentation, feathered dinosaurs were able to capture other animals attention and then some, as feathers can be fluffed, replaced or even laid flat when the animal wanted to avoid a scene. The only thing they were missing was the amazing bulky bodies to go with them.

Source: Could ornamented skulls have helped dinosaurs get big? by Eva Botkin-Kowacki, The Christian Science Monitor