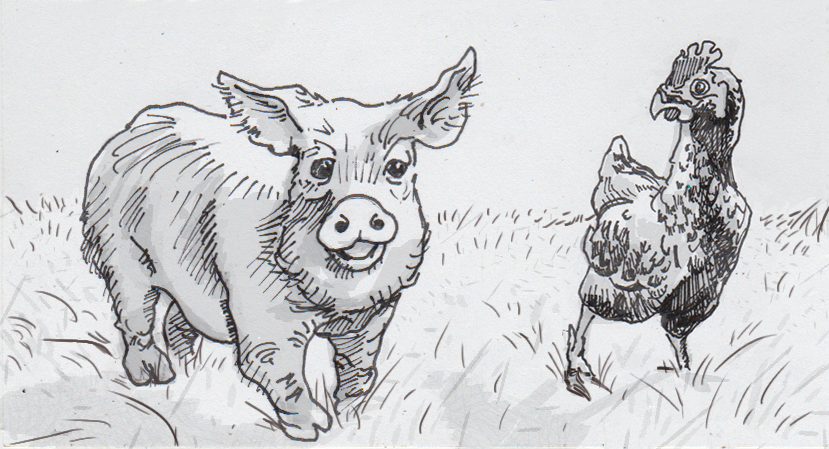 The progression of our preferences for pork and poultry

With two young children in the house, it sometimes feels like human diets are the most narrow, rigid concepts on Earth. We eat macaroni and cheese, cereal, milk and (thankfully) broccoli, and that is how it has always been and will always be. Of course, just as the kids’ palettes will mature (I think), what humans have eaten have changed over time also. Even basic “staples,” like what animals are raised as meat, have shifted over time thanks to regional, economic or cultural influences. Two of the biggest examples of this are actually what are currently the two most popular sources of meat in the United States: pork and chicken.

Humans probably started eating pigs because they ate some of what we ate. Rather than kick of fierce competition for our dinners, it meant wild boars came scavenging around human settlements for our leftovers. Their guts actually prevent them from eating grass, being better suited for calorie-rich and easily digestible foods like nuts and grains, as well as less-savory options like carrion or poop. Foraging among our leftovers was eventually led to Sus scrofa domesticus, a domesticated animal that was profitable to farm thanks to their short gestation, large litters and meat that was easy to cure and store at room temperatures.

Worries over you are what what you ate ate

The pigs’ scavenging origins hurt their reputation as well. The Book of Leviticus and the Koran ban Jews and Muslims from eating pork, as they were considered “unclean.” While a variety of ulterior motives may have been involved in these bans, people seeing pigs eating carrion and waste was probably unsettling and common in regions where pigs needed to make due among human towns and desert flora. This is in contrast to a voracious appetite for pork in contemporary Rome. Pork was a popular staple in Rome around 1000 BC, where the pigs could forage on more appetizing diets found in the region’s oak forests, rather than urban waste.

So if Semitic cultures weren’t eating pigs, what were they putting on their plates? Aside from cud-eating livestock like cows and sheep, around 400 BC a new food animal was starting to catch on among urban foodies. In Maresha, Israel, chickens were being added to the human menu for the first time. While the birds had been raised for eggs and cock-fighting for some time, recently discovered chicken bones bare evidence of butchering for meat. As Maresha was a bustling crossroads, chicken-eating quickly started to spread beyond Israel with travelers and traders in all directions. Within a century, even pork-loving Rome was adopting chicken as a food-source.

So what “lucky” animal will be our favorite food? In the United States, chicken is our most popular meat. Worldwide, pork is still the favorite, although that’s shifting, with chicken predicted to take the top spot within five years. Just as in the past, there are multiple influences driving this. More consumers (again) want to see pigs living in cleaner, more humane conditions. Chickens also require fewer resources to raise than larger mammals, making them more environmentally and economically friendly to produce. Of course, if that’s a motivator, then maybe our next discussion will be about the rise of insects for our protein.

Source: Why The Pig Is The Most Loved And Most Loathed Animal On The Plate by Mark Essig, The Salt