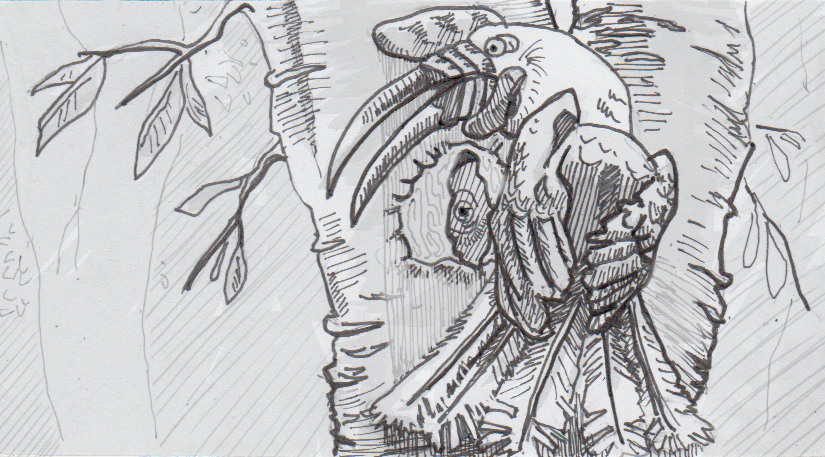 Protecting progeny with their parents’ poo and pee

Parenting can take a lot out of you. There’s the cliche demands, like sleep, patience and money. Then there’s the physically draining activities expected of parents to give their young a safer, healthier start in the world. For strawberry poison-dart frogs and great hornbills, parenting is literally physically draining, although since they’re making use of waste, you probably wouldn’t consider some of these actions to be that big a sacrifice.

Male and female strawberry poison-dart frogs (Oophaga pumilio) both play a role in their offspring’s early life. Before the fertilized eggs hatch, the father-to-be is expected to not only guard the eggs, but also keep them moistened while they mature on the ground. To transport fluids, the male basically repeatedly pees on them, having transported water in his cloaca. This chore isn’t too demanding, and males can make the rounds on multiple broods at once.

Once the eggs hatch, the mother transports her hungry tadpoles, one at a time, to new locations so that they’re separated from each other. While this keeps the tadpoles from eating each other, they still need nourishment, which their mother provides in the form of a daily, unfertilized egg. This is much more energetically costly than the father’s donated resources, and as such keeps the mother limited to one batch of babies at a time. She’s off the hook after about a month, when the tadpoles metamorphose into froglets that can better fend for themselves.

Great hornbills (Buceros bicornis) also make use of their excretions to protect their young. After a mother hornbill makes a nest in a hollow tree or log, she uses her poop as plaster to seal herself into the nest. While the fecal wall provides protection for her and her eggs, it obviously complicates other biological necessities, like eating and continuing to poop. For that, she makes small opening in the plaster so that the male can come and deliver food and so that she can expel further waste out of the nest.

A couple of weeks after the chicks are born, the mother leaves the fecal fortress. The babies can pitch in at this point, and will use their own waste to reseal the entrance, staying inside until they’re mature enough to live without such poopy protection.