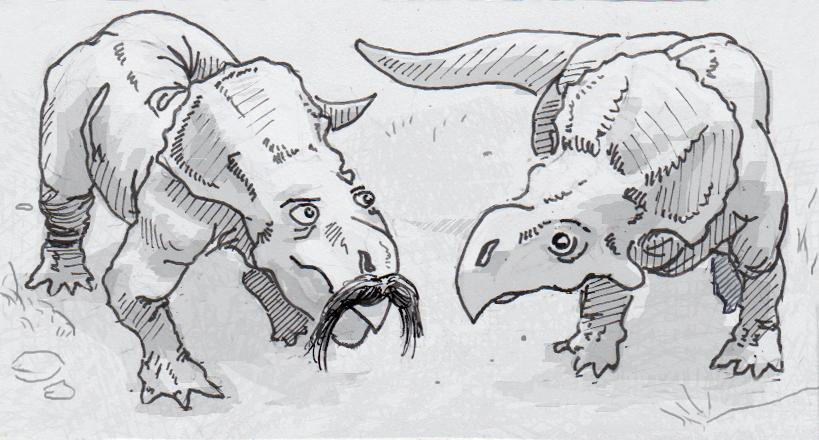 How can you distinguish a male from a female dinosaur, when all you have is a couple of skeletons? In some cases, there might be some differences that are not only obvious between the sexes, but they also follow well-established patterns of related animals, such as male bird tails. Other times, looking for sexual dimorphism, or differences in bodies according to the animal’s sex, might be a little less clear. For instance, observed differences in a fossil might be due to differences in age, as with recently disputed publication on stegosaur sexes. A recent look at protoceratops shows how important sample size is, as well as what metrics are actually measured.

In 1975, Peter Dodson was looking at an assortment of protoceratops skulls. The hornless ceratopsians, almost like smaller, smoother Triceratops, seemed to show some degree of sexual dimorphism in their frills, beaks and brows. Measurements from 24 specimens showed trends that allowed the skulls to be grouped according to what looked like male vs. female dinosaurs.

A second look from a few more angles

Since then, more protoceratops skulls have been found in the Gobi Desert, and new methods for measurement have become available. Photos of 29 more skulls were taken from multiple angles and digitized with key reference points indicated for comparison. The resulting data can then be measured with more granularity than a simple linear measurement along the side of a skull, giving a more accurate idea of the shape of the head. It also allowed for comparisons between more than one dimension at once, giving a better sense of the proportions of the skull overall.

The results are that what would have been males and females under the original sorting methods don’t look so different anymore. While one animal’s frill may have been taller, comparing that ratio to other aspects of the head don’t make it stand out enough to be clearly different from the others. The most distinct feature turned out to be the rise of the beak, where other ceratopsians often have a horn, but even that was not especially different across the board.

So frill-size might not be a sign of masculinity among protoceratops after all. Maybe they grew proto-feather mustaches instead.