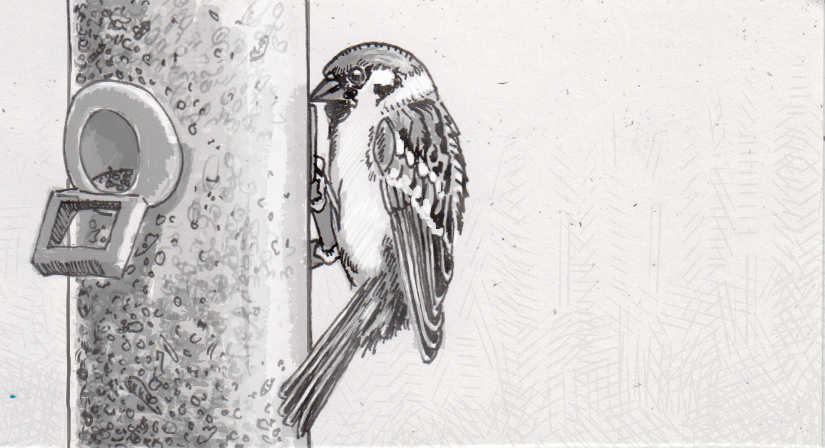 My son and I regularly grumble to each other about the people we see feeding ducks at a nearby park. It happens often enough that he doesn’t even bother repeating comments about how ducks shouldn’t be eating popcorn, and instead just sighs and rolls his eyes as well as a five-year-old can. While we’ve never handed out breadcrumbs to the local mallards, it turns out all these admonishments have been made from a bit of a glass house. Research is finding that other kinds of handouts, like the bird feeder we fill up on our porch, may also make a big impact on the health of migratory birds and potentially anyone that lives near them.

As we all learn at a young age, many bird species in North America migrate during the winter. When the weather gets colder, birds have a harder time finding enough food to eat, so they head south to warmer areas until spring. What’s less obvious to all of us is that those migrations strongly shape the bird’s ecology when they return home. Throughout the winter, migrating birds won’t be exposed to the same set of parasites that they encounter further north. This means that those parasite populations are weakened, making them less of a concern when the birds return. Those parasites also have to remain relatively gentle on their hosts, as a weaker, sicker bird is less likely to survive migrating in the first place, potentially cutting off the parasite’s lineage in the process.

Human-sourced food like bird feeders may be changing this balance. By making food available to bird year-round, a population of permanent residents may develop. Those birds continually interact with parasites, and can become more virulent in well-fed birds’ bodies. If that weren’t enough, the birds that never migrate are likely to lay claim to nesting sites before their traveling cousins’ return. Taken together, it means that birds that do still migrate will find themselves at a considerable disadvantage when they arrive in the spring.

Clean feeders in a migration-friendly yard

So what can you do if you don’t want to inadvertently train your local birds to stay home and strengthen strains of West Nile virus or other parasites? One option is try to plant as many native plants as you can, particularly looking for plants that co-evolved with your area’s native bird populations. While some conservationists advocate for the complete removal of bird feeders, a compromise might be to take steps to keep them clean. Make sure you regularly sweep out old food and husks, and clean feeders and bird baths to head off the transmission of pathogens. It won’t convince your local birds to head south, but it should help keep the birds that stay a bit healthier for the sake of those that still migrate each winter.