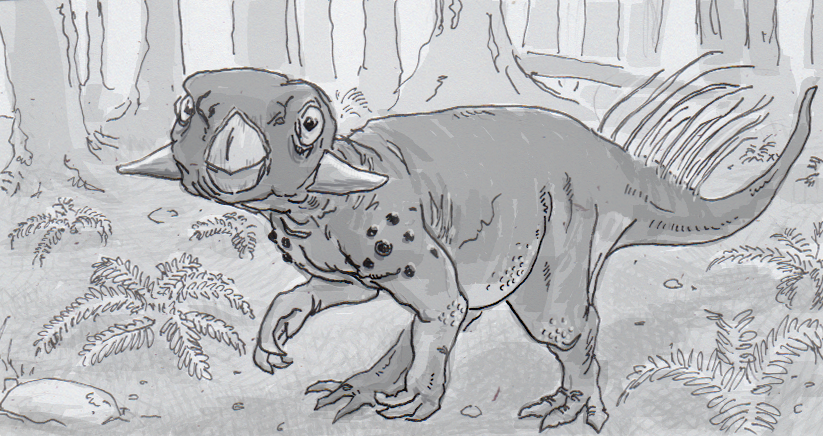 When I was a kid, the outer appearance of dinosaurs was a speculative wilderness. The books on paleontology were getting away from the tail-dragging lizards of yesteryear, but beyond that we had to use our imaginations, and darn it, we liked it that way! In some cases, we liked it beyond rationality! As fossilized skin and feathers have turned up, dinosaurs’ collective visage has been getting fleshed out. Traces of melanin have teased at a some feather coloration, and there’s an indirect case to be made for some reddish hues in the family tree, but a recently unveiled Psittacosaurus specimen blows this all out of the water. We still don’t know what this creature looked like while it lived, but the amount of preserved detail in this dinosaur’s soft tissues leaves very little to the imagination.

Psittacosaurus was an early ceratopsian from what is now Asia. They lacked the neck frill of famous cousins like Triceratops, but they did have a tell-tale beaked mouth for ripping up plant life, plus a couple of spikes coming out of the back of their jaws. They were smaller than these later relatives as well, growing no more than 44 pounds, and possibly be lightweight enough to walk on their hind legs. These structural features have been understood for some time, but this new specimen was found with more than just bones. It also had enough preserved skin and muscle tissue to not only tell us about the animal’s appearance, but even inspire new experiments about where the extinct dinosaur’s original environment.

Soft tissues do occasionally get preserved with fossilized skeletons, but this Psittacosaurus raises the bar significantly. Patterns of coloration are immediately visible, but to be sure it was originally from the dinosaur’s scales and not outside contamination, scientists checked for melanosomes, the parts of a cell that create the pigment melanin. Between this confirmation and the fact that the patterning appears to be symmetrical on both sides of the body, paleontologists are confident that we’re seeing detail once thought to be out of reach for the fossil record.

The soft tissue on this Psittacosaurus showed a lot of variation. A large tuft of long bristles left an imprint in the rock, apparently growing from the top of the hips and tail, although it’s not completely clear what these were used for. The shoulders had larger, dark spots, while the hind legs sported a sort of intertwined, lattice-like striping. It had a notably dark cloaca, as well as lighter flaps of skin that stretched from it’s hand ankle joint to it’s tail called patagiums, details that would be hard to even speculate on without this preserved evidence. Finally, a gradient of dark color from the back to the belly is visible across the dinosaur’s torso, prompting a whole experiment to figure out what these details mean beyond being completely awesome.

A life-sized model was carefully created based on all the preserved evidence, then taken out to the wild for some photo shoots. Countershading is a common coloration pattern found on both on land and marine species, where the animal’s back is darker than its belly. For land animals standing in the sun, the gradient of shading should counteract the highlight at the top of their bodies, so that rather than a clearly convex torso spotlighted from above, potential predators see a flattened, more convoluted shape. Since the color gradient needs to match the amount of direct sunlight in an animal’s environment to be effective, the Psittacosaurus model was taken to various lighting conditions to see where it blended in the best. In the end, the very gradual shift from Psittacosaurus’ dark back to light tummy worked best in forested areas without harsh shadows. This fits well with other lines of evidence, including bits of petrified wood found near Psittacosaurus fossils.

With the amount of tissue preserved, this isn’t the last study that will come of this particular Psittacosaurus. Work is underway to better understand facial musculature, which were thought to be similar parrots when this species was first discovered. There’s obviously still room for imagination in learning about dinosaurs, but in many cases the available evidence is pretty exciting as well.