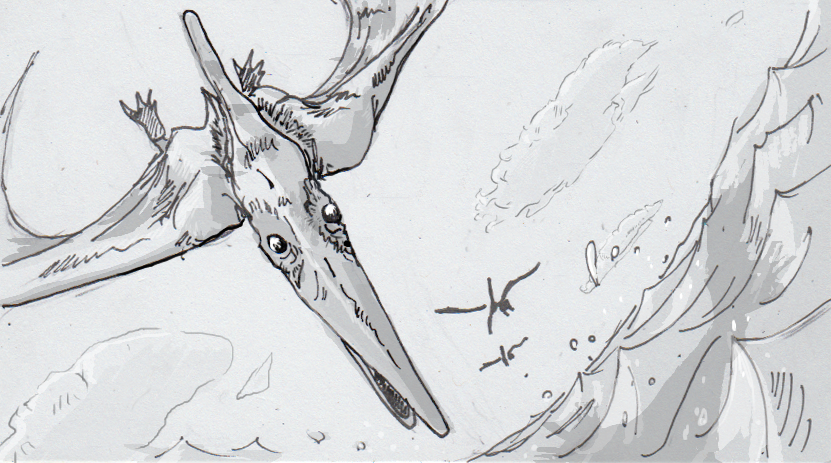 Pterosaurs seemed to be beach goers. Their fossils are predominantly found near ancient shorelines. Their skeletons have been found having consumed, or been consumed by, prehistoric fish. Trace evidence of their footprints also show that they did go in the water, instead of just basking on the shore. This doesn’t mean that they were the Mesozoic’s answer to pelicans or seagulls, however, as a closer look at what they could likely do in the water paints a very different picture from modern seabirds.

Pelicans, ducks and swans are all well-suited to the water thanks to their body’s weight distribution. Most of their muscle is in their legs and low-slung chest, allowing them to sit in the surface of the water while their heads bob about as necessary. The same strong legs that can help catapult most birds into the air also help provide strong propulsion when these birds swim, allowing them to move with relative ease over, and in, the water.

Pterosaurs often didn’t follow this theropod body-plan though. Many pterosaurs had greatly diminished hind legs, with more muscle and weight being centered on their heads and shoulders. Trace fossils show these hind legs scraping the sand, but it’s unclear how the reptiles oriented themselves to avoid marks from their wings and keep their large heads out of the surf, a concern confirmed by 3D simulations of pterosaurs in the water. While a similarly small-legged animal like a bat can keep itself from drowning, they’re not exactly making their homes near the water the way pterosaurs seemed to do. This probably means that pterosaurs weren’t spending a lot of time floating along, but would be more actively engaged during their time in the water, before quickly getting out of it.

A model for this behavior pattern is offered by Pteranodons. Dinosaur Train may not be far off the mark showing animals that would fly over the water before diving to catch a fish, then leave to eat. Biomechanical analysis shows their heads would have been able to safely slice into the water without injury or stress from the impact.

The catch would actually be what happened afterwards, when they were ready to get back out of the water. With larger specimens reaching 20 foot wingspans, they’re probably the largest pterosaur that could successfully force it’s way out of the water without wearing itself out in the process (sorry, Quetzalcoatlus). Launching from water is obviously harder than pushing off a solid surface like a cliff, and the force demanded to get one’s wings above water may help explain the size and orientation of the aforementioned large shoulder muscles on these animals. The same features that limited their swimming may have helped them get back into the air.