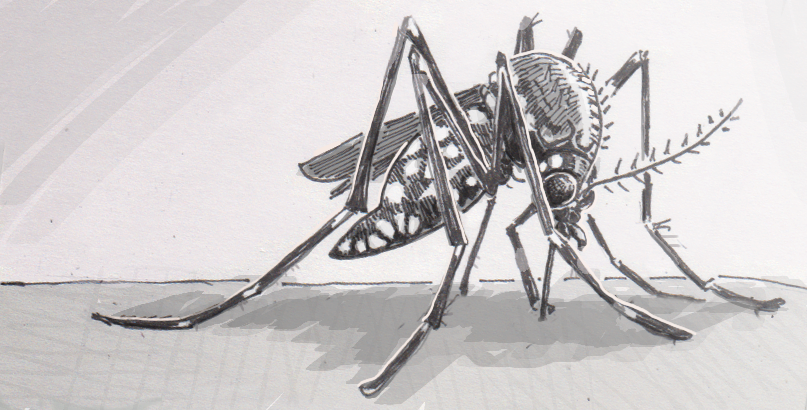 In a battlefield strewn with netting, pesticides and other deterrents, people’s fight against mosquitoes may soon be aided by some new lighting, and the mosquitoes’ own brains. As with many inter-species conflicts, there’s long been an arms race between humans and mosquitoes, with each new defense being challenged and possibly potentially defeated as one side makes small adjustments against the other. For humans, this has meant adding pesticides or repellents to mosquito netting over our beds, but in many parts Africa those tools are being undermined by hungry Anopheline mosquitoes that have learned to wait until we’re out of bed. Still, this attentiveness to a schedule has opened the door to another line of defense— the circadian rhythms that tell us when to sleep, and the mosquitoes when to eat.

Dining in the dark

Anopheline mosquitoes prefer to do their dirty work in the cover of night, getting a lot of their feeding done in the low-light of early morning and the late evenings. Mosquito netting helps keep the insects off sleepers, but if the female mosquitoes wait a person out by feeding in slightly brighter light, netting can only do so much. To develop a non-chemical way to keep the bugs away from people for other parts of the day, scientists started experimenting with resetting the mosquitoes’ internal clocks with carefully-timed lights. If successful, this would essentially confuse the insects enough to miss their optimal feeding times, making their survival much more difficult.

Two experiments were conducted in dark chambers full of mosquitoes. The control group was kept in the dark, while the experimental group was exposed to ten minutes of pulsing white light. When offered a volunteer’s arm to munch on, the insects that had seen some pulsing light were much less likely to feed or even attempt to fly. In a follow-up, the experimental group of mosquitoes was exposed to pulsing light every two hours over a 12-hour night, and their behavior remained altered for four hours afterwards, meaning they weren’t ready for a normal feeding schedule until well after they’d normally eat.

Sensing light to set a schedule

The idea that brief exposure to flashing lights can reshape one’s behavior has been established in other animals already, including humans. While our eyes and brains evolved around the gradual change in light from sunrise to sunset, it turns out that even brief flashes of light can change when we feel awake, hungry, sleepy, etc. These carefully-timed pulses stimulate special ganglion cells in the eye, which then inform our suprachiasmatic nucleus, which then helps govern things like melatonin production so that we feel sleepy at night. In people, adjusting our light intake can enable manipulations to your daily sleep schedule, but for the mosquitoes it means missing feeding hours entirely.

Knowing such a disruption is possible, researchers hope that lights could be used at night to stop mosquitoes from feeding on sleeping humans. While white light was used in these first experiments, other ranges of light are going to be tested, in case they’re still effective while being less disruptive to people. Either way, if flashing lights can reduce the number of mosquito bites people receive, it should help with the larger goal of slowing the spread of dangerous diseases, like malaria or the zika virus. This probably wouldn’t neutralize mosquitoes forever, but it would be a chemical-free way for a lot of people around the world to sleep easier each night.