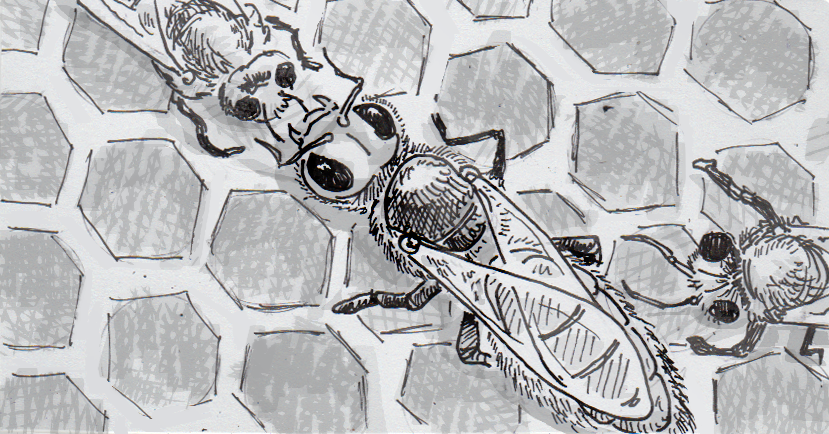 Baby bees don’t get any shots from a doctor, but they have a better vaccination rate than any human population. The underlying concept of bee vaccination is the same as ours, it’s just that bees have a very convenient, mandatory method for delivery— they’re basically born vaccinated thanks to exposure to their mother’s blood as she makes their eggs.

Worker bees go out every day to collect nectar, but of course they bring home bit more than that. Their bodies are also collecting pollen, as well as various germs and pathogens, just like you do when you put your hands in the dirt, a doorknob, or your wet laundry. These small exposures aren’t automatically harmful, and the bees end up feeding some pathogens to the queen along with her meals of “royal jelly.” The pathogens are broken down in the queen bee’s gut before some pieces make their way to her “fat body,” an organ comparable to your liver.

At this point, the pathogen pieces are packaged in a protein called vitellogenin, which allows them to be sent to the developing eggs through the queen bee’s blood stream. The doses are tiny, but just like a shot you get at the doctor, contain enough inert pathogens for the bees’ immune system to learn and build antibodies against them. By the time the bee is born, it’s already immunized.

Isolating vitellogenin’s role in all this is quite promising, as it could be a point of manipulation in the future. There are some diseases, like American Foul Brood, that don’t seem to be caught in this process naturally, so researchers are hoping that we can engineer vaccines to cover these holes in bee immune systems. Using the bees’ existing vaccine delivery system should simplify efforts to bolster colonies of these critical pollinators.