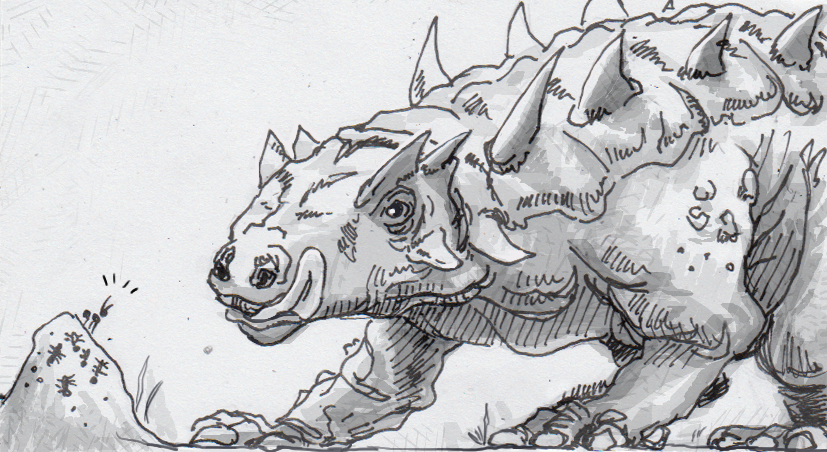 Ankylosaurs are loaded with bone. They’re often described as the “living tanks” of the Cretaceous period thanks to the thick, heavy plates, or ostreoderms, that covered much of their bodies. However, a recently restored skeleton of Pinacosaurus grangeri skeleton has shifted the excitement from the bones outside the ankylosaur’s body to some delicate and elusive bones in the dinosaur’s throat. These thin plates may change notions about non-avian dinosaur evolution, as well as the ecology and diet of ankylosaurs.

The four bones in question, called paraglossalia, are highly modified gill struts from an ancient fish ancestor. Millions of years of evolution reshaped them into flat, triangular shapes, thin enough to be translucent. We know about them as they’re present in birds and avian dinosaurs, but this specimen of P. grangeri was the first time paraglossalia have been found in a non-avian dinosaur. The restoration team was so surprised that they went back and checked other animals in the museum’s collection for other samples, and quickly found some paraglossalia fragments in a Edmontonia skull. Before this point, nobody was expecting to find these bones in non-theropods, and combined with their fragile stature, they’ve been easy to overlook. This doesn’t mean they can be dismissed though, as being on both sides of the archosaur family tree means they must have evolved from a very primitive dinosaur ancestor.

A tongue too useful for just plants

Beyond the implications for the story of dinosaur evolution, paraglossalia in an ankylosaur raise interesting questions about how P. grangeri was using these bones. With these more sophisticated points of attachment, paraglossalia would have allowed for a stronger, more dexterous tongue, possibly capable of some basic grasping motions. This articulation probably would have been wasted on shrubbery, suggesting that P. grangeri‘s diet was more diverse than a strict herbivore.

One of the more obvious options would be for P. grangeri to have been a bit of an insectivore, using its robust tongue like an anteater or even more appropriately, an armadillo. This would fit will with some of the more arid climates the ankylosaur was known to live in, filling in caloric gaps with termite mounds or ants.

Further speculation expands ankylosaur menus even further to include feces or even eggs stolen from nests. The animal’s low-slung stature, armored neck and back, and now adept tongue would have been well suited for guerrilla expeditions into nesting grounds to forage for eggs or food for hatchlings while still being protected from the protests of an angry hadrosaur, for instance. The fact that ankylosaurs lack the robust, sophisticated teeth of other large herbivores like hadrosaurs or ceratopsians, but do have complex nasal structures for finding food more hidden than a bush, and it’s easier to imagine them as more of an omnivore than a specialized vegetarian. More evidence would be needed to support this narrative, but a strong, slurping tongue is a step in the right direction.